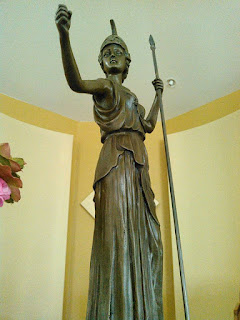 Historians usually pin up ancient Athens when they want to talk about the sexism that existed in ancient Greece, or at least Athens of the Classical Period. While I am certain that sexism existed, as it has existed in many forms throughout human history, I have also found myself increasingly skeptical of its magnitude in ancient Greece.

Ancient Greek sexism is normally applied to a starting point with the writer Hesiod, although the alleged statement he made about women isn't even 1% of his writings. What we must remember about Hesiod's writings is that, what we have today, could, in some cases, be entirely different from what he actually wrote. It's very possible, and likely, that Greek cultures down through the centuries did their own editing based on the culture of their time period. Unlike the bible, there was no "change nothing nor add nothing" when it came to Greek literature. But in the Hesiodic writings, it is claimed that he said that anyone who trusts a woman is a fool, and that she is after everything you have. But depending on translation, such as the one found in my copy, what he actually said was that to trust a woman is to trust a flatterer; do not trust flatterers. Hesiod was only able to look at the world from his own eyes, which were that of a man, so the flatterer to him would have been a woman, whereas a flatterer to a woman may have been a man, and that to let your lust lead you astray without thought and reason, may end up costing you everything you have. He was probably more so warning against a lack of moderation and recklessness than against women themselves.

We are led to believe that in the more Archaic Era of Athens, according to Plato's Dialogue of Critias that, "Military training for both men and women was very common in the ancient days. Athena was adorned with armor - an indication that all the female and male creatures that live together can pursue in common the special talents that are suited to each (Plato Complete Works, 1,296).

But even in the Athenian times of Socrates and Plato, we find that the City, ran by men, venerated a Goddess (Athena) as the Patron of the City, and did so in place of a male God (Poseidon). That's not something you'd expect from a culture that is overly sexist. You normally see that in monotheistic cultures where the worship is centered around one male deity. While the religions have many prominent female figures like the Virgin Mary, they are never considered divine or deified. You'd also not expect a culture, like ancient Greece, to be highly sexist while putting their trust in a female oracle, who was the greatest and most revered one of the ancient world; the Oracle of Delphi. The office was always held by a woman, who had been appointed by Apollo. So a mortal woman was always selected to bring the messages of the Gods to mankind, whereas in the male-dominated monotheistic cultures, women weren't even allowed to be clergy.

Being that Greece in the times of old was not a unified nation, but rather a collection of numerous City-States with their own laws, governments, calendars and religious denominations, it would also be entirely inaccurate to assume they were all the same when it came to societal roles. The women of Sparta were highly revered by the men. Women in Sparta could own land, receive an education, and gained a reputation for being the heads of their households. The Spartan society wanted thriving soldiers, and an essential part to that was a thriving female population to have and care for the men in the military, and naturally to look after things while the men were away at war. So you can't really say that ancient Greece was "this way or that way," because each culture was different.

If you knew nothing of ancient Greece and went back in time to judge their culture by simple appearance, it would shout at you, "We revere the female as well!" There would be no doubt as to what your eyes and mind would automatically interpret as the religious and spiritual foundation of their culture, and in many cases, even in the foundation of their societal roles.

Depending on where you went in the ancient Greek world, and the time period, you were likely to find women in several professions, including priesthoods. A notable woman may have even found herself being worshiped by a locality after her passing, like Helen of Sparta/Troy. Did sexism exist? Of course it did. But were women always viewed as moles of society? Certainly not.