Hermes Answers My Call Again, But A Bit Strangely This Time 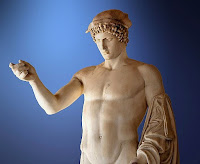 As many know, my wife and I have had our fair share of vehicle problems in the past, and after calling on the Gods on the side of the road, help immediately arrived out of the blue. It happened to me again recently but not in the normal manner of things.

Tonight, I drove to the store for some grocery on an empty tank. I didn't think too much of it because my trusty Saturn, that I named Argo, had ran on empty before. Not this time. On the way back, she ran out of gas literally about a quarter of a mile or so away from my home. I had no money I could get to, didn't even have my phone on me. After trying numerous times to restart, I realized it just wasn't happening. So I get out and start to walk, but something tells me to get back in the car and make sure everything is in the park position (I have a straight gear). While inside, I try to start it up once more, still nothing of course. I look at the Hermes statue on my dashboard and say, "Hermes, please help me."

When I step out of the car again to begin walking, two young guys in a jeep immediately pull up behind me. After inquiring as to what the situation was, they graciously offered to find a gas station and return with a gas can containing enough fuel to get me home. Sure enough, about 10 or 15 minutes later, they returned and filled the tank just enough so that I could complete my journey. Now here's where the strange part happened, although I am sure it's not uncommon. They wanted to pray with me. I thought, "Oh, great. Now they're gonna try to convert me to Christianity. They noticed my bumper stickers." For the sake of being courteous, I decided to consent (although I myself didn't pray, I just stood with them). I mean, these are the guys who just saved me from a serious jam. How can I just snub them? So I figured, it can't hurt to humor them for a few seconds.

Of course, as I suspected, they were Christians trying to convert me, and for some reason I didn't think to mention that I had prayed to Hermes for them just a few seconds before they arrived. I should have taken this opportunity, once they were done, to pray with them also to Hermes. Not for the sake of trying to convert them, but just to let them see that there are many valid points of view. But nevertheless, here we were, Pagans and Christians brought together. Were they supposed to tell me about Jesus, or was I supposed to tell them about Hermes, or neither? When it was all over, I got to thinking about the situation. Why had Hermes sent not only two Christians to rescue me, but two proselytizing Christians at that? Clearly, it was obvious that Hermes wanted me to know they were devout Christians, and once more, that they were helping me. I didn't know the answer, so I consulted my wife, the best oracle I know.

I guess for starters, I have to consider the fact that most people today are Christians. I don't think Hermes had the luxury of picking a Pagan who was nearby and able to help. It was probably a matter of course that the helpers were members of the largest religion, just like if you break down in the middle of Saudi Arabia, if anyone helps you, there's a good chance they'll be Muslim. So I do have to entertain the idea that their religion meant nothing, but then again, why was it brought up if so?

Before my wife began the reading, she reminded me that Hermes has a sense of humor. He likes to play jokes, a Trickster. I chuckled, because I knew it was true. Did Hermes help, but also decide to have a little fun with me in the process? Did He make me the butt of a joke? Possibly. But more so what I discovered, was that Hermes had two things to show me. One, that those Christians made me feel uncomfortable, but that it got me what I needed. The lesson was, sometimes you have to be uncomfortable to get what you want out of life. In other words, if you never step outside your comfort zone, you won't progress. That's a hard reality for so many of us, including myself, but it makes perfect sense. Sometimes, you may not like your work, or the people you work with, but you have to look at the end result. This lesson doesn't have to do with religion necessarily, religion was just used to get the point across. The second part of the reading from Hermes told me that He also wants me to be more social, and interact with the world around me, that I may let go of some of my anger and presumptions about other people. Through this, more advancement in life is possible. This can also be hard for lots of people to do, but also beneficial to not running out of gas again.

And maybe sometimes, it's good for us to come together and help one another, than it is to always be fighting. Perhaps there is more that unites us all than divides us. To the men who helped me, thank you, my friends. If there should come a time in the future when I have the opportunity to repay the generosity, by Zeus I shall.