In issue 36 of the renowned publication Witches & Pagans, Chris releases his true story called In Her Light, detailing how he used his ancient Greek and Pagan spirituality to successfully fight his depression. He also elaborates on his childhood in the rural nature of Thomasville, North Carolina, and how it helped him to build a Pagan perspective on life. Witches & Pagans Magazine retains over 300,000 subscribers and supporters online. 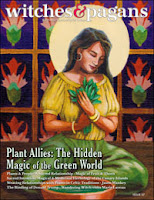 In issue 37 of Witches and Pagans Magazine, Chris appeared again with his article on Moly, for their Plant Allies edition, outlining his in-depth search to discover the identity of the mysterious herb Hermes gave to Odysseus to protect him from the spells of Circe, which is as of today still unknown. Chris publishes his findings in this issue and narrows down the identity of the cure all against harmful magic.

In the Summer 2018 issue of Mad Scientist Journal, Chris releases his adventurous and chilling story called Last Confessions of a Deranged Physicist, about a young scientist who finds a way to tear a natural hole in time and space that he may alter his miserable existence, but ends up learning that his former life was not the worst thing that could happen to a human being. From February 2017 to August 2018, Chris was a consistent writer for the Ohio publication Dark Dossier. In this issue, number 14, Chris released his story called Deepest Doom, which was actually written for the first time when he was first in college in the year 2007 or 2008, and dedicated to the professor of his creative writing class, Mark Branson. The story follows a young man who is routinely abused by his grandmother, and opens with him being driven to murder her. His best friend being the only witness to the killing, is torn between the choice to either report it, or help clean up and hide the mess, but grandmother has one last round of hard knocks for her deranged grandson before she journeys to the dark depths of the Earth. In the Halloween 2017 issue of Dark Dossier, Chris released the tales The Darkness, Song of Sophia, and The Exorcist Memoirs, the latter actually being a true story, as the publication accepted non-fiction submissions as well. The Darkness follows the life of a young man who has been plagued by fears of being lost since childhood, never being able to find his way home, only to now discover that it has manifested into reality. He discovers that he can either fight the nothingness or finally accept it. Song of Sophia follows the story of a deranged mental patient who is haunted by a scorpion and a winged-donkey, personifications of his life. Only his favorite therapist can make them go away for a time, but his obsession with her eventually becomes a ruin. The Exorcist Memoirs is a true story about Chris' own personal experiences doing successful banishment rituals for people he knew, using ancient Greek religion, something never before heard of in the modern exorcist world. In issue 18, Chris published the tale The Lost Union Soldier, a true story about his days as a Civil War reenactor on the battlefield of Bentonville, North Carolina. The experience details how he and his best friend of the time, also a fellow reenactor, encountered what they could only describe as the ghost of a Union soldier running them back into the southern camps. In issue 19, Chris wrote the story Unseen, about a young man who doesn't understand why people ignore him all the time. His only friends are books and places where he finds serenity. He had always assumed that he was just unattractive and no one liked him, but as the pomegranate flows through his veins, reality hits hard. The Lurker in issue 22 was one of Chris' most worked on stories since the late winter of 2017. It follows a young man who is out of luck with a job he hates as a local paraprofessional. With the children and the stress of the job driving him crazy, he becomes convinced that a diabolical toy doll is alive, and is not only trying to get him fired, but destroy the children she resents for treating her like an object. The young para is convinced that he's the only hero who knows what's happening, that other teachers are even in on the plot, and the school must be turned on its ears to foil it once and for all. Issue 23 features part one of Memoirs of a Killer, a fictional tale of a man who is so upset with the way his life has been throughout the years, that he blames the nature of the entire world, and goes on a killing spree to rid it of all human beings he can find, in an attempt to literally start the world over with the hope that the new human race will go in the right direction this time. The story is split into 3 parts, the 2nd and 3rd being published in issue 24. Issue 24 features part two and three of Memoirs of a Killer, along with an additional story titled The Return. Part two and three of Memoirs of a Killer finishes where the first one left off. The young killer tries to finish off his municipality, but finds that because of a divine intervention, he must leave and set his target on a new location. The story ends as the killer discovers that the power to rid the world of wretched humans never needed to involve killing innocent people. There had always been a better way that he doesn't discover until it's too late. The Return opens with a young man who has been forcefully brought back to the town and area he hates and tried so desperately to leave. He soon finds, however, that his best option for escape lies in the stars above. In issue 25 of Dark Dossier, he released a story called Ogre. Based on the grotesque and incestual legends of Goon Road in Illinois and the horrific imagination that it continues to ignite to this day, the story follows a young man in the deep countryside of Illinois who is haunted by the deformed rustic humans who inhabit the depths of the woods nearby. While on a walk, he is eventually pursued by one of the monsters. Upon escape at the end of the story, and much to his horror, the young man discovers the greater reason as to why the ogre was chasing him, something that would alter all he had ever known or chose to accept about his life. 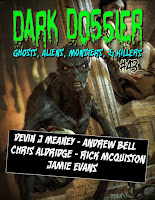 In issue 43 of Dark Dossier, February 2020, Chris returned with a new tale of madness titled Objectified, about a paranoid schizophrenic who is convinced that everything around him is alive and after him and the rest of the world, but ends up finding a solution for the entire human race. This issue is absolutely free to read. Read

In The Creativity Webzine, issue 2, Chris' non-fictional story Gods and Heroes Among Us was published, detailing his real-life experiences with the Greek Gods regarding the birth of his premature son.

In Literary Orphans Journal, issue 32, Chris' fictional story My Time, My Space was published, an epic tale of a young man who had spent his life being persecuted by his government, only to obtain the powers of heaven for a short time, that he may destroy the state and create a new reality. However, that reality is not what he expected at all.


Note
* Please keep in mind that, with the exception of self-publications, all material is linked directly to the sites or selling pages of their respective 2nd party publishers, and could become unavailable or discontinued at their discretion, through no control of Mr. Aldridge.