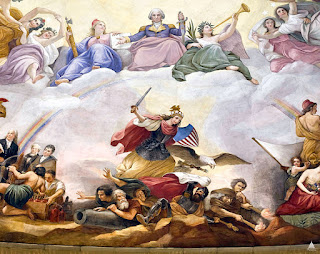 An amazing new series has debuted on American television recently, a wonderful mystery fiction based on America's secret heritage guarded by the legendary Freemasons. The name of the show is The Lost Symbol. However, while the story itself is not true, the elements of it very much are, and it is within this sphere that I was delighted to discover not only a new piece of American history, but also how the United States is so deeply rooted in ancient Greek spirituality.

America has her Heroes, just as ancient Greece did and as all nations today still do. In particular here is George Washington, who is without a doubt one of the most venerated and loved Heroes in all of American history. In the first episode of the new series, the viewer is introduced to a Washington D.C. Capitol dome painting that still stands today, called Apotheosis of Washington. In it, Washington ascends to the heavens in Divine glory, surrounded by many Divine Beings, among them being the Greek Gods Athena and Poseidon if you pull back and look at the entire painting. And trampled under Washington and America are the enemies of freedom. In this scene, George Washington becomes Divine. The name Apotheosis literally means to become a God. A human Hero rising to the rank of Divinity and where Greek Gods even surround Him, is a very ancient Greek belief and ideal. In fact, the painting itself was done after the Civil War by a Greek painter named Constantino Brumidi. It also goes beyond someone's personal painting. Washington is actually worshiped as a holy spiritual power among the Hawaiian Shinto Shrines today.

I am always amazed at how so many of the American people think we are a "Christian nation," while we are clearly more steeped in ancient Greek and ancient polytheism than anything else. But most people passing by don't take time to really look at and examine these things. In all of the grand public structures and art of Washington, D.C., there are no crosses or statues of Jesus, but there are multitudes of Greek Gods and ancient Greek architecture. It cannot be denied that part of America's heritage comes from those ancient Cities and cultures of the Mediterranean. Democracy, personal liberty, free thought and speech, all that makes people free was birthed there, having nothing to do with the bible or Christianity. I enjoy The Lost Symbol series not only because I love America and history, but because our society is starting to understand more and more that we are built from a great multitude of heritages, not just one.