When Monsters Live Among Us 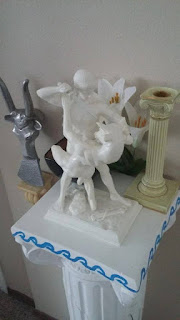 There are two things about me that are not secrets. One, I am a lover of the mysterious and paranormal, and two, I have had my fair share of hostile encounters with malevolent spirits and beings. One such encounter actually led to my conversion to Hellenic Polytheism. I am not skeptical of the spiritual and paranormal, or the unusual and extraordinary side of the world because I have seen and experienced it firsthand.

One such incident happened in 2009 or 2010 in North Carolina. I would have to say around this time period because I remember it being a very hot summer, and I was already Hellenic by that time and it was before I moved out of my first apartment, so it had to have been the summer of 09 or 10. Which, if you've lived in North Carolina, you know summer lasts longer than 3 months. So it's an educated guess as to the exact date. However, the details of the event will stay with me forever.

My wife (fiancee at the time) and I were driving in my old Buick around the town we were in at that moment. It was lunchtime and Anastasia wanted Chinese food. I wasn't in the mood but I wanted to make her happy. Besides, I was normally able to find something I could deal with at a buffet. We located a random restaurant and sat down inside. Two Chinese waitresses dressed in blue stood by the entrance to the dining room. After a few minutes, I just felt immense uneasiness, a presence of sheer hostility. It was something that just made me literally want to move. I soon looked at Anastasia and said, "Can we leave? I don't feel so good." She quickly consented.

On the way home, my wife informed me that the two waitresses had been staring intently at me from behind the entire time. Then, I recalled their eyes as I passed them on the way out. They were as black as night, or at least shadowed to give off such an appearance. I didn't know these people at all, nor had any idea why they would hate me so much. Especially to the point that their energy would impact my feelings. I love the Gods dearly, and I can only conclude that I encountered someone or something in or around them who didn't like the Gods or their people. In ancient Greece, people found monsters in the deepest confines, but today, they have left their prisons and live among us in many forms. This I truly believe.