The Fight
by Chris Aldridge

It happened in three phases the night my physical life started to slip away. 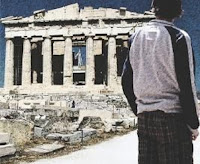 Flashback to before the coma, however. For eleven years, I served the ancient Greek Gods, and still loved them even as I lied on my deathbed, which may sound surreal to some since the year is 2020 CE, but there are more of us than people may think. Before that, I was a Christian, and the angels were, I thought, my companions as they helped me banish evil spirits and exorcise possessed things. From there I moved into ancient Greek religion when the Christian god and his angels failed to appear during a violent exorcism, in which the Greek Gods intervened and saved my life. From that point onward, I entered a realm of numerous Gods, and even spent some time under the Egyptian theology. But despite so many connections, I could not leave Greece, or even simply include it along with other Gods. The emotional and mental wars within nearly ripped me apart at one time, but Greece was where I felt at home.

I went into battle for the old way of life that morning, to protect the ruins of an ancient Greek temple from modern destruction, and that's where I received the concussion. For a Hellene, even the few scattered blocks of a religious center that their ancestors venerated, was worth defending. Nothing stopped us from being spiritual, nor did any amount of desecration stop our connection with the Higher Powers, so we weren't about to let developers and zealots stand in the way. But I must be honest, at that point in my life, I was so battle weary. It caused me to let my guard down and stagger.

The protests and human barriers formed by the devoted soon turned into battle lines and entrenchments, something that should have never happened, but our foes threw the first blows, forcing us into self-defense. I became so tired as shield and baton collided with my body, and eventually, a stone was thrown that sent me into blackness. The doctors did not expect me to live.

As I lay in bed, I began to see more than nothingness, however. Friends and family gathered around me were in a different world, but the one I first entered was a desert, with a glimpse of glittering water on the horizon. Damn, was it hot, though! The sun blazed from above mercilessly, and the river was far out of reach. "I'll die soon here," I thought. Then he came, with grains of sand shooting forth before his human feet. Blowing forcefully from his nostrils and stabbing the ground with his staff, he struck my soul with a stare before I even turned to see his familiar face. "Khnum?" I whispered. My old patron of Egypt nodded, his wavy horns reminding me of the fresh currents I so desperately wanted to reach. "I thought we ended our connection a long time ago," I said confusingly.

The Egyptian God of the Nile lifted his staff to point toward the waters. I followed with my eyes, and as he then pointed the tip of his scepter at me in a stabbing position, I understood the choice I had; make it to the water or die as he chased me down. I'll admit, it wasn't easy running from a God who embodies a ram, either. Nevertheless, if I didn't try, I would perish right where I stood. I dashed forward, Khnum right behind me. It wasn't long before the heat and sand choked my throat and bured my eyes. "I gave him so much devotion in the past, I don't know why he's doing this," I whimpered in my mind. The river came closer with each step, but I also felt myself getting slower as the God gained on me by the second. I knew I couldn't stop. I thought that surely I would look down and see the tip of his scepter protruding from my stomach, but then, the muddy banks oozed between my toes and I devoured the water as I fell to my knees. Khnum stopped, put his hand on my shoulder, and vanished.

I looked up to find myself in a thick forest surrounded by lotuses of all colors. They came from the ground and sat upon the streams that passed. Even the trees grew them on their branches that stretched down to my nose. I enjoyed the smell and the peace they offered until the pedals blew off and turned into sharp splinters that shot at me. Despite my best attempts to dodge, my arms and legs were cut. Then the shattered flowers came together to form her, Saraswati, the Hindu Goddess of music and knowledge. I had known her in my past, but had a feeling she wasn't here to discuss old times. Her clothes were gorgeous and her flowing hair and captivating eyes only added to my helplessness as she began to play her guitar. The sounds came in beams of energy that entered my ears and head, dragging me into a deep state of sleep and paralyzation.

"How bad do you want to live, Chris?" she asked. "Because if you pass out, it's all over."

"This is just the human side of life I am sending you," she informed.

I collapsed onto my side, tears flooding the soil beneath my face as my eyelids came closer and closer together.

"You don't give your mind enough credit," she informed. "The guy I knew never gave up on anything in his life."

She was right, and I couldn't let that change now. I realized that my choices were clear. I could either let the troubles of the human world rule me, or I could focus and overcome. Slowly, I began to pull myself back up. Every muscle into standing position felt like a knife, but the tears and screams were worth it when I reached the end. She stopped playing and smiled as she faded into the air.

At this point, I started to kind of understand what was happening, but didn't know what to expect in detail next as I found myself on concrete steps; I appeared to be in a city or town of some kind. A church stood before me, but there was no one else around. Dead silence filled the air, like a ghost town.

Like an arrow, a sword of fire blazed by my head and zoomed around my body before it lodged into the blocks of walkway under my feet. I sighed and looked behind me. "Long time, no see, Mike," I said, as the archangel approached me, his wings fluttering majestically in the sun.

"I used to be your patron and closest spirit," he reminded me, "spent many battles together."

"Those days are long gone, angel," I replied. "You betrayed me."

"Well, let's see what you've learned since then," he smiled, retrieving his sword like a magnet and charging at me.

We threw punches and kicks as I simultaneously tried to avoid the death of his infernal blade, but soon he knocked me to the ground and raised his sword high.

"What was that prayer you were always saying?" he said. "Glorious prince of the heavenly host, Saint Michael, protect us!" His words echoed in the world around me as the fire from his sword encircled me.

There was no way I was going to die here, especially in this way. I came back to my feet, jumped out of the blaze, and grabbed the sword as we wrestled back and forth. My first trial took the strength of body, the second of mind. But sometimes, there are things I can't do on my own, I realized. For that, there is the Gods.

I bowed my head to pray while keeping the weapon of the angel as tightly in my hands as possible. "Holy Athena, most beloved daughter of the King of all Gods, please remember my past devotion and come fight for me!"