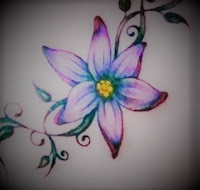 Sappho's palace remained abandoned for centuries after her death, then the Goddess of love claimed it for her own, as a home on Earth. Immediately using her divine powers to restore the structure, it became not a place bound to one area, but able to follow her wherever she went and stand wherever she so desired. At present, it resided in the secluded regions of the gorgeous mountains of Asheville.

On the way, Michael felt a distinct change, his voice returning to its deepness. "I think my male side just came back."

"It will fluctuate until you learn to control it more," she explained. "But keep in mind, neither side is unnatural to you. You yourself have the ability to be both, or as humans call it, gender fluid."

Once Michael saw the palace, he could think of nothing else for a brief moment as he marveled at the steps and ionic columns of pure gold and towering crystal, and flowers from everywhere in the ancient world that flooded the beds around them. The roof was made of shining bronze and joined together by silver. Greek sphinxes stood guard outside the entrance; not statues, real ones, who obeyed every word of the Goddess.

"Welcome home," she smiled at Michael. "You wanted me to be with you for a while, here's my palace, borrowed from the late Sappho. The one they call the 10th Muse."

She led her astonished protege into the foyer, where he beheld even more wonder. Statues of all the Greek Gods cast in flawless marble lined the halls, and paintings of their mythologies hung on the walls. Chandeliers of diamond descended from the ceiling, and carpets made of the most comfortable fabric unknown to Earth covered the walking areas. There were fountains of lions and doves that circulated water which sparkled as if sunlight shined upon them, and they all fed the baths of the Goddess located on the lower level among the palace gardens.

But what intrigued Michael the most at that time were the people who presently resided there. Men and women of amazing beauty and uniqueness approached to welcome the Goddess and her new guest.

"Allow me to introduce you to your new friends," smiled the Goddess. "Amara, Akeno, Luciana, and Liam. There's more who come by from time to time, but these four are permanent residents."

"I'm Michael, or Mikayla depending on who I am at the time."

"Where are you from?" asked Liam.

"I'm sure you'll make him welcome," interrupted the Goddess. "For now, I have to be going off on other business. Become well acquainted."

They invited Michael to join them in the parlor.

Maenads brought them the best wines directly from the vines blessed by Dionysus, and only the freshest and healthiest foods were presented from the maids of Demeter. They were all also extremely beautiful. As payment for their services, they enjoyed stay and support on the palace grounds, which was very rewarding since they no longer had a safe place among the world of humans who, in Greece, had mostly been made into Christians. Sometimes, they would also go serve their patron Gods, but in this time period, no ancient person could afford to take any options off the table.

The parlor was lit, in part, by fires that had been offered to the Goddess during her ancient festivals throughout the centuries. Yet, the temperature was never uncomfortable at any time during the year. The couches and chairs were made incredibly soft by an abundance of swan feathers (a sacred animal of the Goddess), and an indescribable rhythm vibrated from the walls to give peace of mind and body, formed from the hymns to the Goddess that had been recited by so many people for so long. The soothing vibrations also restored the health and youth of the body by eliminating their stresses. Nothing in mundane life could compare to the security and calmness.

"How did you meet her?" asked Amara of Michael.

"Who? The Goddess?" he replied.

"Well it's not every day that someone sees her in the flesh, so what happened?"

Michael paused in thought for a moment, formulating his response in a comprehensive way. "She liberated me, really. Made me comfortable with myself for the first time in my life. I don't know how she heard my prayer, or why she cared, but I'm so glad she did," he smiled. "How about all of you? You haven't told me your stories yet."

"I'm a transwoman from the central region of Africa," Amara began. "My family took and abandoned me in the middle of the jungle to die, but the Goddess found me in time."

"I'm a transman from China," said Akeno. "No one ever tried to hurt me, but my family disowned me. The Goddess is the only mother I've ever known."

"Well, I'm not trans," next went Luciana. "I was born a woman and still am, but I'm a lesbian. I'm originally from Brazil. I was always hopelessly intrigued by the story of Sappho and the island of Lesbos. I wanted a part of it all so bad that I prayed to the Goddess day and night until she finally answered. Took years."

"I'm Liam from Ontario. Like Luciana, I'm not trans. I was born a man and still am, but I'm gay. My journey here is kind of a private thing. Not something I'd like to talk about publicly. I just focus on the fact that I'm in a better life."

Michael smiled, "It appears as if I am the only gender fluid person here, then."

"Yes, you're unique even among us," said Amara, everyone following with friendly laughter.

Michael took a deep breath, smiled and glanced over his surroundings. "I do feel very at home here. It's so nice to be yourself and be around people who don't judge you for it, who accept you even, for who you are," he explained. Then he slightly lowered his head, "I don't know if I can even go back to my old family now, even for a visit."

"You know something that would make you feel a lot better?" asked Amara. "Purification. Since it's your first time here, I gather that you haven't had it yet."

"In ancient times, no one entered a house or sanctuary of a God without first being washed of all of their impurities," she explained.

"And how do I do that exactly?"

His new friends led him to the lower level gardens where the baths of the Goddess stood.

There were no lights in the pools, yet the water was as blue as the sky without any daylight above. Lotus blossoms and roses floated within and the waters themselves were held by giant seashells. The pleasant fragrance was so alluring that Michael didn't need any encouragement. He went in even with all his clothes on, since they needed a serious rinse, too. No soap was needed. The waters were amazing cleansers.

With the rushing of the waters over his body, not only did he become cleaner, but his strength increased, even old scars from past injuries vanished, and the divine imprint on his shoulder became slightly brighter as the left vine grew by half an inch and headed for the spinal area.

"Amazing," he whispered, looking at his hands that were now slightly glowing.

"The baths of the Goddess clean and enhance you in every way," informed Amara briefly.

When Michael rose to leave the baths, he was instructed to let himself dry naturally, that the full essence of the water could soak into and rest upon him. Meanwhile, he was taken to his bedroom for the remainder of the night, on a bed of silk. It was obvious to his deep thoughts that being in this palace and taking the waters of the Goddess was doing something more than just making him comfortable with his mere sexuality and identity. He was changing entirely, the mundane was being washed down the drains along with his old self.

Part 3 Coming Soon.
If You Missed Part 1, It Can Be Found Here
Please Feel Free To Leave Ratings and Comments Below.
Posted by Chris Aldridge at 2:52 PM