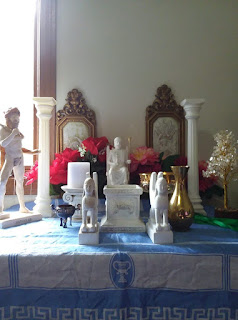 I've done many series on my blog, and today I am delighted to begin a new one, which will consist of 12 installments. As I have said in the past, even after being a Hellenic priest for 10 years, I still get basic questions from people, especially newcomers, on how to begin practicing Hellenic religion and Hellenic life. Normally, these inquiries center around the entirety of ancient Greek theology, but sometimes, people will ask about how they can start Henotheistic worship. Henotheism is the belief in many Gods but choosing to only focus on one of them, at least primarily, for your worship. So the Oracle of Delphi was a Henotheist. She didn't deny the other Gods, but her main devotion was to Apollon. It wasn't something uncommon in the Greek world, and while it may be less common now in the modern Pagan and Polytheistic communities, it still exists. In this series, I will instruct Hellenic Henotheists on how to build and operate shrines and altars to their individual Gods, starting here with Zeus. It should also be noted that individual shrines and temples were nearly the norm in ancient Greece. There was no temple to all the Gods (although there was an altar in Athens to The Dodekatheon). Normally, however, each temple or place of worship, even the city itself, was dedicated to one particular God. That practice in and of itself does not constitute Henotheism, but normally a Hellene will have numerous individual shrines throughout their homes or properties, and these posts can therefore help all Hellenists too.

Let's begin with the basic structure of a shrine and altar. These are two separate things, the shrine being for representation and veneration of the God, and the altar for their sacrifices. As well, the shrine and altar should ideally be in an enclosed room that is separate from the rest of the general house. However, it is understandable that some people cannot fulfill any of these requirements, and in that case, it's alright to have the shrine and altar as one in the same, and to put it in the most secure and appropriate place available to you. Every altar, however, needs to have a place for sacrifice, an incense burner, libation glass or vessel, and a candle for the altar flame each time rites are done there.

There are two very common questions I get regarding Henotheistic devotion, and those are: What do I put on my shrine, and what kind of sacrifices does this God like? Obviously starting with Zeus, let's discuss the shrine. As said earlier, this is literally the holy place, the sacred house or housing, of the representation of the God, and even for the presence of the God themselves during worship and sacrifice. When it comes to Zeus, your central piece should be a statue or an image of Him. Surrounding this statue should be all things relevant to Zeus' Divinity, Being, and if you want, even some of His mythological stories. For examples, oak tree, lightning bolts, eagles, sky and clouds, rain, and anything that symbolizes kingship (preferably ancient Greek in nature). Normally, I would also section off this kind of shrine with four Greek pillars, one on each corner, or at least two in the front, to show that it is its own sacred and holy place, to be untouched and unhindered by anyone or anything. Now if you want, you can include Spirits and Heroes who can help you connect with Zeus, and as a brief example, those would be The Litae and Herakles. The former are Spirits who carry prayers to Him, and Herakles, of course, is the Heroic son of Zeus (He's also manifests as a God). This would require additional prayer and sacrifice to ask for their intercession, if you will.

For general sacrifice at the altar of Zeus, He enjoys storax incense according to the Orphic Texts, and a general pleasing aroma to all Gods is frankincense. Libations to Zeus should be the best of your house, so the best wines and general beverages. Oxen meat is traditional sacrifice to Zeus, or to put it in modern general terms, cattle meat. So think along the lines of beef and steak.

Here at this shrine and altar, one should recite daily prayer and hymn to Zeus, even if its their own customs ones. Of course, the ancient texts of Homer and Orpheus as an example, provide numerous ones already written that can be recited. Maintenance of the shrine and altar and the area surrounding it is just as important as the veneration of the God. Not only does cleanliness prevent the intervention of miasma, but you can't respect a God whose house you let fall apart.

Part 2 of this series will describe a Henotheistic shrine of Hera, Queen of heaven.
Posted by Chris Aldridge at 4:46 PM