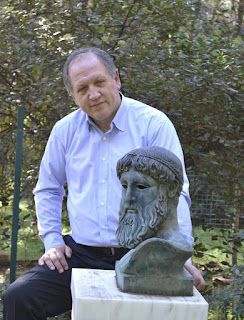 Stunned isn't the word to describe how I felt this morning when the Greek and American Hellenes announced that Vlassis Rassias passed away today, July 7th, 2019, he was 60 years old. The cause of his death has not yet been made clear, nor the intentions for his burial. But I don't mind that. I would prefer to remember how he lived. Vlassis' life has always been an inspiration to me as a Hellene. He has been on the stage of restoring ancient Greek religion ever since 1976, when a Christian monk smashed the statue of Zeus outside of the Ministry of Education in Athens. I think he, and many others, were awakened to the reality that has befallen the Greek people for so long. Vlassis' work has aided greatly in returning ancient Greek religion to world legitimacy, and educating people about the truth of the Christian takeover of the Greek culture. I think that, if he wanted to accomplish one thing with his life, it would be to see the Greek people break free of the chains that have held them down for centuries. Hopefully, that will happen one day.

During our conversations online, I was always impressed with his knowledge of my language. He was always generous and willing to talk with people about anything they wanted to know. He was even kind enough to send me a copy of the YSEE flag as a gift. I still have it hanging around my family shrine and it will now always remain there in memory of him in my home. It will be flown also on my flag pole today, off my balcony, in his memory. I think that he would want us to press on as a community and keep our spirit and mission alive.

The announcement of his death came to me completely unexpectedly, because I had just talked to him on messenger last Tuesday. Nothing seemed wrong, but of course, you can't really tell such things just by talking through emails. For me, it's still sinking in, and I never even personally met him, so I can only imagine the grief that his close friends and family are experiencing at this time. I have said in the past that none of us know when we're going to pass on, and so it's important to live our lives to the fullest. Vlassis was certainly one of those people. He didn't seem to hold anything back. He loved the Gods and loved his life. He will certainly be remembered and honored as a Hero by my temple. Goodbye, my friend. I will miss our conversations. Although I now hope that you will be speaking our names when you converse with the Gods.

Please send your condolences to the Greek and American YSEE. I have also created an online memorial for Vlassis, like I do with all of my passed friends and family members. You can read a bit about his life and leave flowers and comments. As more information comes in, the memorial will probably grow over time. Click here.

In the Goodness of the Gods,
Priest Christopher Aldridge.
Temple Of The Greek Gods.
Posted by Chris at 10:53 AM