All That Is The Goddess Of Love 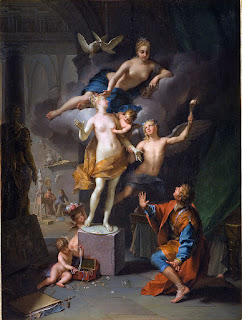 On July 4th, we celebrated one of my favorite ancient Greek festivals known as Aphrodisia (the Athenian festival of Aphrodite, the Goddess of love and sex). I thought my temple and I had a wonderful ceremony and celebration. If you want to view the rite on video, click here.

Depending on where you went in the ancient Greek world, you might get a different view of Aphrodite. In some places She was viewed as a Goddess more of marital sex, whereas in others, She was the Goddess of love, sex, beauty and pleasure universally, whether it occurred in marriage or not. I view Her as the latter, but also believe She plays an important role in marriages as well, because even between spouses, physical satisfaction is important to happiness and strength in a relationship. My wife and I have never lost our passion for one another, even after being together for 10 years at this point. We are as crazy about each other today as we were then. This has remained a core strength in our union and I thank Aphrodite for that.

But I took time this month after the festival to think about all that Aphrodite encompasses in this world and human life. The ancient Greeks had 6 different kinds of love, which is one reason I think ancient Greek religion is so brilliant, because it understands the reality of the Universe. There is, of course, Eros, who is the God of erotic sexual passion. Literally, He entails the basic carnal instinct of humans, the lust that we all have for one another. It's our natural and basic self, the enjoyment of sex. Second comes Philia, which is the love that binds together strong friendships. This can be both sexual and non-sexual, but normally refers to the general concept of good and close friends. Third is Ludus, playful love. This is the love between youths. Fourth is Agape, meaning universal love. Agape encompasses literally the love of the human race, what you might call humanitarianism. Fifth is Pragma, meaning enduring love between lifelong partners or spouses. My wife and I who have been together for a decade and still have the same passion and dedication for one another, would certainly be a state of Pragma. Last, but not least, there is Philautia, meaning the love of self. On the surface, it might sound arrogant, but only if used in the wrong way. It is important to love yourself in a positive manner. Self-loathing is not a healthy state for anyone. To be secure, confident and happy in your life and the things that are part of it, is good Philautia.

In my view, while there are obviously different Beings and forces of love, Aphrodite is the Supreme Ruler or Leader of them all. She's always been a Goddess particularly close to me in life. I remember way back in the day, around 2005 or 2006 when I first started exploring Greek Polytheism, I would pray to Her for success in attracting a female partner. Often times, I would have better encounters with women afterwards. When I told my mom, she said, "Maybe you should pray to Her more often."

Since I officially became Hellenic, I have looked at Aphrodite in the broader perspective of Her Divinity. As the Goddess of love, I think that means all of it. Whether it be love between best friends, or sexual partners. Whether it be the love of life or that of your fellow human being. I also can't help but imagine how wonderful the world would be if we all adopted the ancient Greek ideals of love in our lives. What if we all sincerely loved ourselves and one another?

In the Goodness of Aphrodite,
Chris Aldridge.
Posted by Chris at 3:13 PM