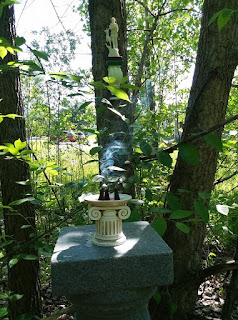 Nature is a holy place for the Pagan/Polytheist, and I have often heard that forests are our temples, churches and cathedrals. Don't get me wrong, we Greeks do love our brick and mortar temples. In fact, the Hellenic historian Walter Burkert calls us a "temple culture." However, there were also many sanctuaries and holy places that were built or found in the Natural World. The Gods are connected to Nature, so it would be ridiculous to somehow think that Nature isn't their home as well. For 2.5 years, I built and maintained an open air sanctuary of Artemis in the forested hills of Elizabeth, Illinois, from 2016-2018.

When summer rolls in, I do enjoy a good time of worship in the forest, no matter how small it may be. I grew up in probably one of the biggest ones in Davidson County, North Carolina, but wherever there is a woodland, my adoration is drawn, and for good reason. On this beautiful June day that you can see in the picture at the top right, I took one of my light columns (made of hard plastic instead of alabaster so it would be much easier and less strenuous to carry), and set up a place for sacrifice to Artemis and the Forest Divinities.

Growing up, the forest was my main stomping ground. I learned to commune with the trees, streams, animals and the mysteries of the forest better than I did with humans, although as an adult, I did make love in the forest at times. Not to mention the sheer adventure of the unknown, the discoveries that lay beyond my own treelines. But I can also attest to the fact that the Natural World does wonders for the human mind, and that's why I go into the forests for both religious and health reasons. Even if it's just a small patch of woods behind a building or park area, wherever the Natural World blooms or thrives, humans can find the Gods and their own refuge. These natural places are literally like doors of the Universe, opening up to the Divinities who rule them and their natural states wherever they may be in the Universe. You could connect with Poseidon, for example, through a sea or spring found on Earth as well as one found on another planet. And a small grouping of trees in your backyard is just as good a door to Artemis as the largest forest on another continent. There is no requirement in size or location. They create connections to the Gods wherever they are found because they are things the Gods love, govern and manifest through.

Standing in the warm sun, looking up at the bright green leaves and listening to the sounds of birds and winds as the Gods whisper to me through them, has done more for my mental stability and health than any medication. I am not the only one to report these benefits either. I imagine the reason for such revelation, if you will, in the forest and other natural places, is because of the fact that we are pulled from the mainstream society where all of our burdens lie, and secondly, we get back into that natural connection with Divinity.

Being in Nature, in my experience, also makes you realize the important things in life outside of society's constant lust for money, power and success. Not that these things are wrong. There is nothing evil or immoral about having lots of money and security, a nice home, and a good career, but when we arrive at a point where we basically build shrines to these things and bow down before them, we have gone too far and it will lead to destruction. Walk through that vibrant forest and you'll realize that the true riches of the Earth grow and flow naturally for everyone. You will enter a world where money has no need or power, and once your mind and body are released from that monetary chain, you are basically renewed into the original human self and soul, which is your happiest, most natural state.