Personal Ancestors: To Invoke Their Presence 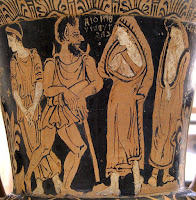 I've always enjoyed a vast range in my spirituality, which is probably one of the biggest draws for people to Paganism and Polytheism. Just on a direct spiritual level alone, there are Gods, Spirits, Heroes and Ancestors. Anyone who is looking for a good taste of religion, they are sure to find it here. I think spiritual diversity is also the reason most Christians are Catholics, because the saints and angels open up a broad range of personal engagement, not to mention the various rituals of the church. Humans don't like boring things. In the past, we have examined invoking high level beings like Heroes and Spirits for assistance in our world and lives, but we should also equally consider the importance of our personal ancestors for two reasons. One, they are very close to us through family ties and lifelong relationships that existed, and two, they can therefore be among the easiest for us to contact, especially quickly.

Many of you, however, are probably thinking it might not be such a good idea to invoke a relative who was a different religion than yourself, especially if it's Christianity. I myself have also thought about this factor, but based on my experiences, I have come to the conclusion that it doesn't matter. Our passed ancestors exist on a far higher plane of intelligence and are no longer bound to physical human prejudices. In other words, the Ancestors are enlightened beings. For example, when my grandmother was alive, she was a radical Christian. Even though she was radical, though, she was still a very kind person and loved me a lot. However, my father and grandfather were not religious people at all. After all three of them had passed on, there came a time when I began giving offerings and prayer to them, but I stopped most of it because I would sometimes have dreams where my father and grandfather would be upset with me for contacting them, yet my grandmother would always come to me in a loving presence, despite her Christian life on Earth. So I really don't think religion is a factor in beings of higher status above the physical, and who are in communion with the Gods. Like I said, I think prejudice and exclusivity is a physical human condition, and not something that occurs to higher intelligence.

I have not contacted my father and grandfather since they essentially told me to stop, and honestly, I don't really mind. They were never really that nice to me in life in the first place, and it's possible they simply don't want to be bothered right now just like any given person you see on the street may not want to be, but my grandmother was always kind and there for me. I think that because of her life of kindness, she might even exist now in more peace than my other relatives, and there are times when I invoke her for a number of reasons. I call on her mainly to help bring calm energy into my life or home, or to protect my children. A prayer to her is much the same as any other being I'd pray to. I start with her name and any titles she may have had, followed by stating my identity and how I am relevant to her, and finally, my request.

If you want to try this for yourself with your own ancestors, there are a few guidelines I would suggest for the best results. First, choose someone who was particularly close to you in a unique way. For example, my grandmother was one of my strongest influences in my childhood and teenage life. She knows me very, very well. Second, make sure the person you're contacting was friendly to you in life, did you favors, looked out for you, etc. Because these people will naturally be likely to befriend and help you again. Finally, make your offerings to them consist of things they either enjoyed in life, or that you are personally known for giving them. I might give a libation of sweet tea to my grandmother because she was a southern woman and liked it. Someone else might give their ancestor a specific continuous gift. If, for example, they always bought the person a necklace on their birthday. Each year on that day, they might consider continuing it at the altar.

My last word on the matter here is that ancestors, of course, are not Gods, they may not even be Heroes, but they are still more powerful than we are. When you pray, give it all you've got, and that goes for really anytime you petition the Higher Powers. Pray earnestly, like you mean it. Beseech.

In the Goodness of the Gods,
Chris Aldridge.
Posted by Chris at 11:38 PM