Let Your Religion Be Therapeutic 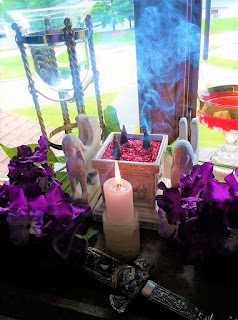 Sometimes you just have to find yourself a quiet corner, throw up a beautiful statue and some amazingly good incense, and commune with the Gods to maintain your sanity and calmness. We come to many points in our everyday lives when our religion is the only thing that will keep us from exploding or doing things we will later regret. It might even be the only way we can drive depression and anxiety from our bodies. It's one reason I laugh when I hear people say that religion is harmful, because at least for me, it's been my only salvation at times.

Now a lot of people, even in the Pagan community, are critical of those who use their religion as a medication for their mental and emotional issues, but I think the only time there should be concern is if the individual in question isn't seeking medical assistance in the process. I have also sought and obtained therapy and medication for my own mental anguish issues in the past, but my religion has also been like another medication all together, sometimes a more powerful one. The truth of that simply cannot be denied. In fact, there have even been people who were turned away from crime or suicide because they found religion. In my view, religion and spirituality are just natural parts of the human makeup, and without them, we feel that a piece of something is missing, something that our entire existence can hinge upon.

I have often found myself running to a shrine and altar more than a medicine cabinet and a pill bottle. When I close my eyes, meditate, lift my hands, take in the sweet fragrance of the sacrifice, and speak those ancient and holy names, there is nothing in my life that can bother me. In fact, the bad things are combated. Because no matter how big something is, it's not going to be bigger than the Gods. Nothing can defeat them, period. And really, the broader picture is spirituality in general. I have found that even when I commune with Spirits, Heroes and Ancestors, that there is also a victory over my ailments, especially those of the mind, and I think one reason that the Higher Powers like to focus on improving our minds so much is because everything else will fall into place. If you have a healthy mentality, you will do healthy things. If you don't, you won't.

Don't get me wrong. I'm not telling you to not get the medical attention you may need. I have always believed in medicine, and that the Gods gave us these medicines and our doctors for good reason. To not use what the Gods have given us, is to throw their gifts back at them, which is an ultimate mark of disrespect and ungratefulness, even arrogance. And indeed, there are some things that no amount of medication will fix. No pill is going to change your finances, or the fact that your girlfriend left you. What I am saying is that it is perfectly fine and legitimate to find solace in your religion as well. It's okay if your religion is another successful medication or a support in your toughest times. The Gods are real and they do take part in our lives. Don't be afraid of that truth.