Keep Bad Spirits Out Of Your Life: A Greek Guide 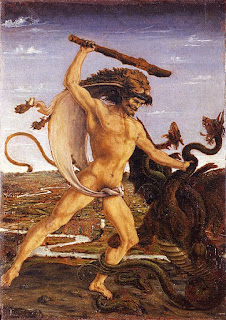 My official conversion happened when Athena and Apollon banished an evil spirit from my apartment one summer night in 2009. Sometimes, taking into account what was witnessed, I believe the Gods may have simply killed the spirit all together, destroyed it completely so that it could no longer wreak chaos upon order. I wish I could tell you that there are no such things, and that everything around us is all sunshine, rainbows and happy puppies, but the reality is that we live in a Universe filled with beings, some of them not having our best interests at heart. They can even be hostile for one reason or another, and these beings can be composed of many things.

You may come into contact with a spirit, a ghost, or a chaotic or hostile energy of some sort; the latter usually not having a consciousness but they still cause chaos and hardship because of the nature of their existence. Think of it like electricity running to a light bulb. Each time the switch is turned, the energy goes to the bulb. It does nothing else except what it was meant to. These things can either attach to you by way of interaction or after being sent your way by someone else. You might encounter one or many by trespassing onto protected or sacred grounds or areas without realizing it; you might even find that the negative being after you is a manifestation of your own personal negativity if you are prone to doing lots of negative things in your life. And of course, if you create a consistent negative atmosphere around yourself, it can draw in other negative entities. Things tend to go the path of least resistance. So if there's no positive atmosphere, negative things will have a very easy time not only interacting with you, but staying. 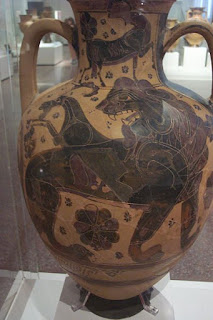 A spiritual being or energy can be good, evil, or neither, and the latter can act on whatever it feels it should at the time. If you have offended it, you may be attacked. On the other hand, if you have honored or respected it, you may very well be on the end of a reward. A good spirit will not harm you. They will benefit you if anything. We invoke the Agathos Daimon (Good Spirit) in Hellenic religion for this reason. The only ones you have to avoid are the evil, or ones that may potentially bring you harm. Fortunately, there are many ways to do this, or to banish the being that has invaded your life already.

Option 1 - Daily Sacrifice
There is nothing more powerful than the Gods, that's just the way it is. They possess the ultimate ruling powers and authorities of the Universe, of all things we see and cannot see. One way we gain their attention, and strengthen our spirituality on a consistent basis, is by doing daily rites or rituals. These of course include things like prayer and hymn, but equally important, sacrifice/offering to the Gods to gain their reciprocity and presence. Each time we invoke the Gods in this way, we are inviting them into all parts of our lives, which is good because the Gods enjoy taking a role in our activities. To gain the presence and approval of the Gods each day will also bring the greatest good, power and positivity into any given situation. When the Gods come, evil will run away. Nothing will be able to stand against them, no matter how sinister. The Gods don't even have to put their hands up, they'll just throw the opponent out on their butt. So by maintaining a strong, daily connection with the Gods, and asking for their assistance in keeping you safe and free of evil and negativity, malicious beings or energies simply won't be able to remain.

Option 2 - Invoke Heroes
In the past, I have mentioned the benefits of having Patron Heroes in our day-to-day lives, but that in and of itself isn't a requirement. Heroes of all kinds can respond to us at any time they choose, whether they are our Patrons or not. You would petition them in much the same way you would a God, through things like prayer and sacrifice, although it would be beneficial if you had a relic or some gift that is specific to the Hero individually. In ancient Greek religion, Heroes often destroyed horrific monsters and malicious creatures, like Theseus against the Minotaur, Bellerophon against the Chimera, and Herakles against the Hydra. In other words, the Heroes often specialize in ridding people of negative things. Just to give an example for myself, I once successfully banished a spirit from a friend's home, in part, by praying for the intervention of Bellerophon. Each day, call upon a Hero who fights against monsters for your protection.

Option 3 - Shielding
Meditation is an immensely crucial element to your protection, because it clears and strengthens the mind, which allows your own personal powers to flow more strongly. A troubled or chaotic mind is a perfect victim and a very easy target for spiritual or energetic invaders. Consistent shielding through meditation, however, can stop them. In the past, I did a youtube video outlining a shielding meditation centered around Athena, but you can also shield with your own personal energy. It won't be as powerful as a God, but it can still suffice. Simply envision yourself in your aura, bubble, armor, or whatever kind of protective material you prefer, and mentally push your own energy into it as much as possible, giving it strength with the intent to keep away anything evil, negative or hostile toward you. Do this each and every day.

Option 4 - Live Positive (The Hardest One Of All)
I used to say that I hate negative people, but that mentality itself is also negative. So I shall say, I don't like living in or around negativity, no matter who or where it comes from. I once even thought about starting a global "Positive Movement," to shun all the negative things that are constantly being put out there and restore humanity to a happy mentality. Everywhere you go, and in everything you do, there's always going to be something telling you how bad things are, and that you better prepare for the sky to fall. We ourselves can also live negative lives by falling too deeply into the common ailments of the human being; complaining, whining, fighting, and hating. When we plunge ourselves into negativity by our own doing, we create that negative atmosphere of mind and body that I talked about earlier. Step one, turn off the news and unfollow people and websites who post negative things. If you happen to come across something, put it out of mind immediately. Step two, live happily every day. Don't let anything ruin it, because when you get down to the bottom line, it's never worth it. You would rather be happy than live and die sad or upset.

In the Goodness of the Gods,
Chris Aldridge.
Posted by Chris at 7:22 PM