Temple Of Nemesis Surfaces In Mytilene 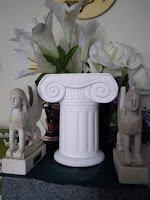 Hellenists and Greek Pagans alike know the name well, and would probably mostly prefer to not be visited by Her. I am referring to Nemesis, the Goddess born of primordial darkness and is the consort of the realm of Tartaros, the Greek lower underworld of pain and punishment. Her name means "to give what is due;" as She visits upon people the punishment they deserve in this life for their wrongdoings if they have somehow escaped justice. Other cultures might call Her karma or the avenging One. Nemesis is basically shrouded in the ideal that you will not forever get away with your scams, crimes and swindles against other people or the Gods. One could invoke Her for justice upon an unpunished individual, and if She visits you personally, there's probably a good chance it's not for tea. However, originally, it appears that Nemesis was someone who simply distributed what was due to each person, whether for the good or the bad. It was later that She became the Divine Avenger.


Nevertheless, the Greeks still built temples to Her, as recent archaeology has discovered, this one in particular being near the ancient theater in a place called Mytilene. The City was born on the island of Lesbos in the 11th century BCE, making it around as old as the Trojan War itself. Just off the coast of Asia Minor, Lesbos is one of the places which gives testament to the far reaching influence of ancient Greek religion beyond the Hellenic mainland before Alexander. However, this particular temple of Nemesis itself was not constructed until the 1st century CE, over a thousand years after the City was established. But it was a complete place of honor and worship, able to receive proper offerings and devotion.

The theater was used in the times of Rome for Games and gladiators, which makes the archaeologists think that the temple was built as an establishment for giving proper due to the winners. If true, this would mean that Nemesis is a Goddess who gives what is due in general, a universal Returner, not merely One who punishes for misdeeds. I think it's a wonderful finding and I hope we continue to unearth and preserve more relics of our ancient religions.

It should go without saying that I, of course, believe in Nemesis, and She is just one more Goddess I believe in because I have seen Her. I have witnessed Her wrath upon people all of my life. From those who did people wrong and got away with it, or found a way to scam people by manipulating the legal system. The latter people She has been the worst on in my experience. Believe me, you will pay for hurting others, and you will answer for your actions, sooner or later. However, there is also the Litai, which carry prayers of repentance up to Zeus, the highest of all Gods. I would therefore say it's possible for someone to gain forgiveness for their misdeed, and through the release given by Zeus, avoid Ones like Nemesis. But I also imagine that for a grave offense, it would take a lot of hard praying, sincerity, sacrifice and labor.

How do you view Nemesis? Do you think She solely punishes evil, or do you think She distributes dues to each person, whether for the good or the bad?