Exploring Inside Tombs Of Greek Heroes 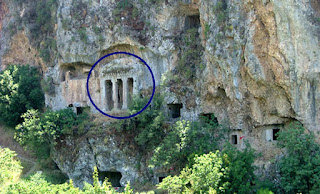 The ancient Greek Hero Bellerophon's final resting place, allegedly, once resided in a rock-cut tomb found in modern Tlos in Turkey, on the southern coastal region of what was Asia Minor. Being from Korinth on the Greek mainland, it's a mystery as to why Bellerophon was entombed here other than the fact that this is where He rode Pegasos and slayed the Chimera monster, His most notable achievement and service to the people of the region who were being terrorized by it. Back then, the region was called Lycia. Resting on a high hill, the tomb lies empty today with its Ionic columns, structures that actually predate the official Greek Ionic Era, dating back to the Archaic Age of Ionia itself. Nevertheless, Bellerophon's time predates it by a long shot, going all the way to the Heroic Age, so the Ionic columns on Bellerophon's tomb were either added later, or the art is far older than we think.

What ties the tomb to Bellerophon is its carving, which can still be seen today on the left wall near the entrance, of Bellerophon riding Pegasos into battle. In ancient times, inscriptions on tombs were normally there to tell something about the life of the deceased, which means that the person lying in this particular tomb may have very well been the Hero Himself. But unfortunately, looking inside the burial chambers, all of them are empty today. Not a single trace remains other than the hollow rock layers. All the remains have either been moved to unknown locations or lost. Being that there's also more than one burial chamber, the tomb was clearly meant for more than one body, which means that perhaps Bellerophon and His family and/or close associates rested here, or maybe even other Heroes of Lycia.

Google Earth offers an amazing view of the ruins of Tlos if you want a broader view of the actual landscape itself. Bellerophon's tomb, however, is really the only thing I am interested in here. Obviously for Hellenists and Greek Pagans, it holds the potential for a pilgrimage site, if only we can decipher the mysterious drawing of Bellerophon and Pegasos at the entrance. Why was it put there? Is there any explanation other than the fact that this was where the body of the Hero once rested? Or perhaps it could have been put there as a symbol of the Hero's protection over the deceased, but why? Bellerophon is a Hero who wards off evil, but He's not a Hero of the dead, the afterlife or the Underworld. There were many other symbols they could have used for merely repelling negative things. Furthermore, if it was used for that purpose on these tombs, why is it only found on one of them? Clearly, there is some obvious connection to the Hero. Unfortunately, the vacant structure leaves us with more questions than answers.