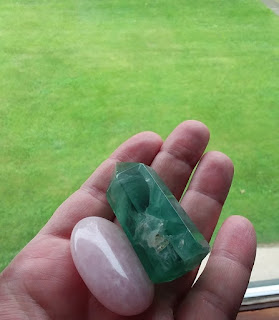 Interestingly derived from the ancient Greek word "krustallos," I've always loved crystals, ever since childhood. I remember when my science classes would look at the ancient rocks, an astounding peace and endless intrigue would fill me, and still does. I should probably get a job as a geologist, but I have to consider financial practicality in life. While crystal work isn't a specific practice in ancient Greek religion, they are clearly of the Earth's wealth and beauty. These things are ruled over and given to us by the Gods, so it would be nonsense to not reasonably use them to our prosperity, especially when the said crystal can be specifically directed toward an element or a Deity of Greek religion. In those respects, they're really no different than relics, a concept fully known to the ancient Greeks and their religious practices.

Needless to say, I have LOVED crystal work since the first day I found it in Paganism, although the practice isn't inherently Pagan itself. But I have decided to get into it seriously, even working on building a crystal altar. 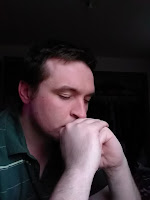 For example, one of my favorite crystals is the Rose Quartz, which you can see in the above picture on the left. Now each practitioner will probably give you a different answer as to what specific crystals can be used for, but the Rose generally is for heightened spirituality and calmness. For the Greek practitioner who is deeply religious and spiritual in everything they do in life, and for someone like me who battles anxiety issues, this beauty is a wonderful thing to just hold in your hand or keep on you in general. One does not even need a special ceremonial setting. I sit at my desk in the quiet, light a candle the same color as the crystal, enclose the crystal in my hand, and hold my hand up to my chin with my head slightly tilted down, like in a prayer position but not for that reason. It's just a gesture to invoke relaxation. See in the picture to the left.

Closing my eyes, I allow the crystal's energy to release and pour over me from head to toe. If you have a really good Rose, you won't even have to use your mental powers. But for the sake of univeralism if you must, imagine the pink energy doing what I described. There's nothing else that must be done, just let the crystal's power cover and infiltrate your body. If you're suffering from severe depression or anxiety disorder, believe me, the Rose is a great asset. If you want to add to the increase, you could invoke Gods of peace such as Eirene or Demeter, but it's not a necessity. During this elevated sense of things, you may also be able to better attune with Deities in general because of the spiritual element of the crystal.

The other crystal in the picture above holds a very special crossover. I don't actually know its name officially, but I would have to guess a form of Dioptase. Originally, I obtained this crystal back in 2013 and used it as a representation of the Agathos Daimon (Good Spirit) on my family's home altar, mainly because both its color and the Daimon are Chthonic. So when used for that purpose, the Good Spirit can be invoked for the person who has the crystal in their possession, but Dioptase itself gives someone a well-rounded understanding of their existence and a positive outlook on life. Wonderful for someone like me who has suffered from bipolar and confidence issues in the past. But really, just the essence of the crystals themselves, for me any way, is enough to change my entire mood. They really are a Divine blessing.

I've also taken the liberty of listing the Olympian Gods and crystals associated with them. The thing to remember, however, is that like a Greek God, a crystal can encompass a number of epithets. It would therefore not be possible to say that one crystal is only meant for one God. For example, Tiger's Eye, Lapis Lazuli and Agate could all be tied to Athena for their protection and mental advancement. So the list is by no means an exclusive one.

The best part about crystal work is that the crystals can be purchased in a pocket size, so they can always be kept on an individual, and while an official altar is good, it's one thing that is not necessary for crystal work. It's something anyone can do successfully with extreme, basic ease.

In the Goodness of the Gods,
Chris Aldridge.
Posted by Chris at 7:33 PM