What's The Death Penalty Got To Do With It? 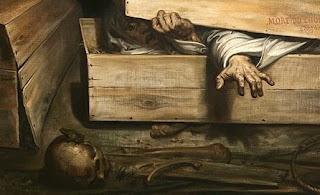 In mostly any religious or spiritual community, the death penalty is going to be a topic of controversy, but I don't believe it's ever been discussed within the ancient Greek community. The ultimate question is: Does the State, or any institution of law, have the right to kill a criminal? Many people say yes, many say no. And not every State agrees that it has that right itself, because some of them have banned the punishment, converting death sentences to life imprisonment. Twenty States plus DC have abolished it within their own jurisdictions.

Among my friends on Facebook who responded to a recent poll I posted on the question, 55% were in favor of the death penalty, while 45% were against. But on my temple's Facebook page, the same question was posted. The results were 50% in favor and 50% against, split down the middle.

I will say that I am mostly against it. Like many, I consider it to be a violation of the cruel and unusual punishment clause in the Constitution. Of course, imprisonment is also cruel, especially for long periods of time, but sentencing someone to death, then letting them think about it for years, only to slowly lead them to the gallows so to speak, where they are strapped down and poisoned, is cruelty in excess. I also consider the fact that our justice system will never be perfect because it's man-made, and therefore, our system should never be deciding who lives or dies. We have actually executed people before, or locked them up for most of their life, only to later find out that they were innocent. Not to mention that our society creates a lot of its own criminals. Our government won't do anything about poverty or obscene one-sided wealth distribution, or about racism and discrimination. So sometimes, I really don't feel sorry for American society. That's not to say that the crime is ok, but we as a people don't do ourselves any favors in the matter. You shouldn't be allowed to create criminals and then kill them for it.

Looking at it from a religious and spiritual point of view, I will certainly find controversy in ancient Greece. They used the death penalty regularly, and not just for murderers. You could be sentenced to death if you were found guilty of impiety, like Socrates falsely was.  But it was also true that a temple was considered to be the holy home of the God that it represented, and it was a grave offenses to murder or kill someone therein. That's why you hear instances of accused people running inside of temples and refusing to come out. They knew the State would not go in there and execute them. Therefore, it's obvious to me that the Gods detest the death penalty in their presence, and if the Gods detest it, it would be pious for their followers to also rebuke it. That's my view on it.

In the Goodness of the Gods,
Chris Aldridge.
Posted by Chris at 12:36 AM