The Darkening Age ~ Good and Not So Good 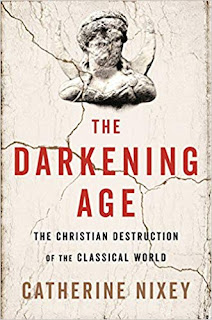 For a long time, Pagans and Polytheists have been waiting for a modern, scholarly work on the facts of early Christian terrorism, violence and forced conversions against the indigenous people and religions of Europe. All of the history is written by the Christian church, who frankly lies, omits, distorts and exaggerates as often as they do Mass. But now, at least some of the truth is finally here, and it has gained the attention of the New York Times and has made the Editor's Choice edition. I enjoyed reading the book, although, as you will eventually see, I didn't like every part of it.

The main point of the story is rather simple. The Christian church hates, and has always hated, Pagans and Polytheists. Even as liberal as Pope Francis is, he's called Pagans dirty, and in not so many words, evil and immoral. And rest assured, in the not so distant past, a book like The Darkening Age would have been burned in bonfires and its author jailed and/or beaten or executed by the Christian authorities.

Catherine starts her book with what is, I think, the perfect quote from one St. Shenoute. "There is no crime for those who have Christ." This was the attitude of the early Christian movement as it plowed its way into power, the idea that anything someone does in the name of Jesus, is justified. What would be called a holy persecution. We know that, in some ranks, this mentality is still around today. "You persecute us, it's wrong. If we persecute you, it's in the name of the Lord and good for you." It is the mind of a hypocrite to us, but to someone who possesses it, it's a wonderful thing if it "roots out evil" or "gets people to accept Christ." We have lived in dangerous times for radicalism, and still do. Reading this book made me realize that if your religion tells you that it's a beautiful thing to rob, ransack and kill people who disagree with you, it's not religion, it's hate, and you should throw that book in the trash where it belongs.

The book opens up, fittingly for me, with the destruction of a temple of Athena in Palmyra (modern day Syria). Rarely does a book break my heart, but this entry made it tremble. However, I've always had a good relationship with Athena, so She gave strength right back to me. The way in which she describes the attackers destroying the temple and statue, puts a picture of the modern Islamic State or ISIS in your head. You begin to realize just how far, vast and influential the destruction of the ancient world was. The crimes against Greece described in the book bring tears to my eyes, but are also ones that even I as an historian had never before read. The author really brings to light the grim reality of a Christianized world, not just religiously, but culturally all together, even down to the kind of foods that people were allowed to eat and the kinds of sexuality they could explore, if any. Human suffering was highly elevated like never before through the condemnation of anything pleasurable or enjoyable. If tyranny ever had a definition, you would think that this book considers it to be Christianity.

I also very much like how the author exposes the "early persecution of Christians" for the propaganda martyrdom scheme that it was, and is still used as to this day. Catherine stunned me even more when she identified the fact that some of the "Christian persecutions" consisted of Pagans simply fighting back against the terrorism that gave them no choice but to kill or be killed, the Christian attackers giving them no alternative but to stand and fight to save their culture and belongings. So not only does the author show how the early Christians terrorized their way into power, she explains how they gained false pity and support as well to assist in the ascension. You begin to realize just how carefully crafted this coup of the ancient world was. As well, I enjoyed the section where she revealed that the Hebrew bible was first translated in Greek through the Library of Alexandria, as were scores of other texts in the ancient world that were sent there. For a long time, Christians or their supporters have argued that Christianity "flourished" in Greece, and as proof, we see that the bible was translated into Greek. This is a huge exaggeration. The bible was translated into Greek for the library of many other Greek texts, and it was done by a few scribes, not the country of Greece itself. It does not mean, in any sense, that the Greek people by and large willingly accepted Christianity. I could travel to China and get someone to translate my own works into Chinese, but that doesn't mean the nation has suddenly accepted my belief. It just means they can now read it.

The thing I extremely disagree with the author on is concerning the parts of her book where she characterizes the ancient Greek and Roman religions as having no hope for an afterlife and no guidance in the present life, and also when she paints the ancient Greek philosophers with the brush of atheism and claims that faith was the "lowest form of cognition" for the Greek philosopher. These claims and characterizations have remained prominent in modern education for a long time, and are all untrue, and I am sure my Religio Romana friends would agree with me on their own behalf as well. The ancient Greek religion, even if you examine the writings of philosophers like Plato, clearly offered a hopeful afterlife, from the Isle of the Blessed where anyone of virtue could go, to reincarnation. As far as moral guidance in the present life, the Maxims of Delphi alone offer 147 guidelines, or if someone is looking for something more simple, perhaps the 10 Tenets of Solon. The idea that the ancient religion was void of actual substance is simply wrong at best, and sheer ignorance at worst.

But my biggest issue is the same one I've had with so many modern historians for so long, her claim that the ancient Greek philosophers were atheists. Some might have been, but many of them were not. For her to say that a Greek philosopher considered faith to be the lowest form of cognition, doesn't go well with Plato's statement that "We are twice armed when we fight with faith." Plato here clearly considers our power in things to be greatly enhanced through faith, not demeaned. The author takes measure to also paint Democritus and his theory of atoms as an atheist manifesto, but he was anything but an atheist. Democritus famously said, "Now, as of old, the Gods give men all good things." The author is under the mistaken impression, probably because she's so used to seeing religion through Abrahamic eyes, that religion and science must inherently be opposed. But for the ancient Greeks, this was not the case. The Gods were everywhere and in everything, which is why the Greeks had no word for religion. The Gods and their ethical guidelines encouraged people to seek wisdom and reach for the higher things in life. The Gods themselves were the founders and Lords of the sciences and arts. Being content with ignorance was not an ancient Greek virtue at all, and to simply seek to understand the existence of things and how they work, does not make someone an atheist. Like most modern teachers and writers who aren't ancient Greek or Pagan, she has virtually no understanding of the ancient Gods or the people who devoted their societies to them.

Lastly, when it comes to the ancient philosophers, I think we also have to keep in mind that we probably don't have most of their writings in full, if at all. There were likely more philosophers than we actually know of, but records of them have all perished. Aristotle for example, I dare say, might be so popular largely because we have his work, and the records of an ancient writer are automatically going to be prized in a modern world. But in logical reasoning, Socrates, Plato and Aristotle were probably 3 philosophers among hundreds or thousands. So it's probably faulty for us to characterize the beliefs and worldviews of the Greek philosopher on the opinions of a handful. Finding one philosopher who is a genuine atheist, hardly means that "the Greek philosopher didn't have faith or believe in the Gods." Socrates, Plato and Aristotle, by the way, were all Greek Polytheists. Socrates explicitly died for his belief that Apollon had sent him on a holy mission to enlighten the Greeks.

But ignoring her misunderstandings, I still find myself to consider the book an essential piece to understanding the realities of Christian dominance against indigenous Europe and the extent to which it literally terrorized, even its own people, to achieve that power. I give the book 4.5 stars out of 5, even though I am quite upset with her depiction of ancient religion, because I feel that the over all truth this book has to reveal to the world, desperately needs to be told. Just hold your nose and keep reading.

In the Goodness of the Gods,
Chris Aldridge.
Posted by Chris at 5:14 PM