OBERON ~ Where Is The Pagan Elder These Days? 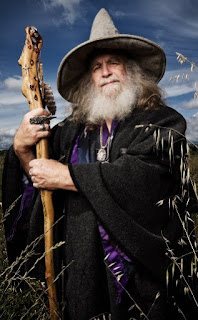 So many of us love Oberon, even if we're not the same religion or Path as him. I for one have always adored the man. I even had the pleasure of meeting him in 2012 at the Tennessee Pagan Unity Festival, but this was by no means the first time I had heard of Oberon Zell. I encountered the Pagan and Wizard back when I first began studying Magick in 2007 and 2008, although Christopher Penczak was a heavy influence of mine as well. But just by doing a general search for information on modern Magick and Paganism, one was likely to find Oberon and his publications. I even joined his Grey School of Wizardry around this time and did quite well during my time there.

I still have an account with the school, as a matter of fact, but I haven't activated it again in years. Needless to say, I moved on into a specific Path that didn't place a lot of emphasis on the Grey School, but nevertheless, it is certainly a place to learn the wisdom of the ages, including that of ancient Greece. However, even though I haven't been a student there in forever, Oberon has always been a mentor and a guide for me over the years. I've went to him several times for advice on spiritual and religious matters. And who knows, I may decide to return and finish one day in the near future.

I caught up with Oberon online recently to ask him how his life has been since the sad passing of his wife Morning Glory. The Pagan Elder has actually been an extensive traveler these days, even visiting other countries like Guatemala. According to Oberon, he loves being on the road and visiting new places. "You can't just sit around," as he said, and I would imagine he's correct, especially when you are an Elder and only have so much time left in this present manifestation. You can either live the rest to the fullest, or lie down for the rest of the ride. Oberon chooses to ride, and I admire that about him. As the last Maxim of Delphi says, when you reach the end, do so without sorrow. Oberon isn't ever going to live in a permanent state of sorrow. We can learn a lot from him.

I asked Oberon some specific questions about his life today. The first was, Since the unfortunate passing of your wife, you've been traveling, even to other countries. Do you find a solace and a greater purpose in your travels? What does it do for you at this point in your life?

He replied, I have always traveled widely as the opportunity and invitation arise. I always say there are three ways people can travel: people go places, people are sent places, and people are brought places. Mostly I have been brought places - all over the world, usually to be a speaker/presenter at various festivals or other events. I've gone to a number of places over the years - such as the World Sci-Fi cons, the Parliament of World Religions, the International Trade Shows, but I've never been sent places, as I have no organization with enough money to do so.

But in this walkabout, I am going places. Mostly driving around the country on my own - something I've never done before, as I always traveled with others (particularly Morning Glory). Most of my travels abroad, however, have been with Dona, my beloved Consort of the past 37 years. She works the 3 Texas Renaissance festivals, and has for the past 45 years. But she likes to travel between the Faires, and I'm one of her favorite traveling companions, so we've gone a lot of places together over the years.

But to answer your question: I haven't thought about solace, but I suppose there's a degree of that. It's more that I feel I am doing what I'm supposed to be doing in getting out and meeting my People in their homes, stores, and environs; rather than just at festivals where we're all coming from somewhere else. Much of my life is not about what I want to do so much as it is I feel what I'm supposed to do. After all, I'm on Her Majesty's Sacred Service! But I'm also on a quest. As I travel throughout the land, visiting different places and reconnecting with many past (and a few present) lovers and friends, I'm seeking a Home and Someone to share it with.

My second question was, You've done a lot of work in Paganism over the decades. Do you find, in your travels, that you are seeing the good jobs you've done with people and places?

He replied, Yes, definitely! I'm immensely proud of the Pagan community I launched over 50 years ago, when I first claimed the identity of Pagan and began promoting it to other groups newly emerging in the late 60's. Now several generations along, each generation seems to be even more beautiful than the last. Beautiful music, beautiful crafts, beautiful art, beautiful rituals, beautiful people. Heartfull, passionate, compassionate, caring, committed, dedicated, inspired and inspiring. My People. I feel like a proud grandfather at the Thanksgiving Feast.

My final picking of Oberon's brain was about something I had always wondered about him. I asked, What made you become Pagan in the first place? Most people, even today, aren't introduced to Paganism as a child. They are normally introduced to Abrahamic religion.

Oberon explained, It was different for me. When I was just learning to read, my parents got a set of Childcraft books. One of them was titled, "Myths and Legends of All Nations." I devoured it! So my first reading was children's versions of the Greek myths, long before I was old enough to go to Sunday School and learn the Bible stories (which weren't about my heritage anyway. The Bible is the story of the Jews, not the Irish, Scots, Norse).

As a Hellenist, I found it wonderful that the Greek stories were what first pulled at him. Oberon and I aren't the same religion. He may not be an adherent to Hellenismos specifically, but he has certainly spent his life paving the path of Pagan rights in America for us all. The fact that he sees its success wherever he travels, shows what a success his life and Paganism have become. I certainly wish Oberon nothing but the blessings of Hermes as he travels, and I pray he finds what he's looking for. He certainly deserves it.

In the Goodness of the Gods,
Chris Aldridge.
Posted by Chris at 11:52 PM