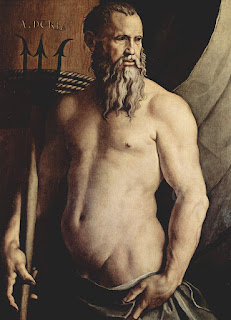 Ostia, Italy is home to a new Neptune statue, but no one knows how it got there. The sculptor and placer has remained anonymous, which also means there's virtually no information on the statue's origin or meaning as it stands strongly on the shores outside the Roman capital. The Roman Gods are not the same as the Greek, I know. But Neptune would be the closest to Poseidon in the major ancient Roman world. Some even do consider them to be equivalents, and any time the ancient world makes a comeback, it's worth noting and researching.

Of course, I can't say anything concrete about the story, but I know if it were me, the statue would have obviously been placed there for religious reasons, and to symbolize the failure of the modern State. As I have said before, Greece and Rome today are not even shadows of their former glories. It doesn't have to do with theology itself necessarily. It's possible to believe in the old Gods and still be a loser through your own sorriness or bad decisions. It's also possible to be a Christian and be successful in life. However, the ancient mindset, which was centered around the ancient understandings of theology, piety, virtue, and human philosophy, enabled the ancient cultures like Greece and Rome to become among the greatest powers of the Earth. The reason Christianity is listed as a reason for the fall of Rome is because, when that mentality set in, people no longer cared about this life or this world. They came to believe there was little to no meaning, and therefore, no need to be great or work to improve the State. The only thing that mattered was personally preparing yourself for an afterlife. In other words, death became more important than living in this particular world.

When we consider these factors, it's no surprise to me that Europe is having a "Pagan revival" as some call it. Not only are more and more people feeling the calling of the ancient Gods again, but they're realizing that the abandonment of ancient wisdom was a mistake that has led to many downfalls in their societies. As far as the Neptune statue itself, it's also possible that someone simply enjoys the art and mythology, but I know that if I had done it, it wouldn't have been for mere show and tell. It would have been a statement to the Roman people.