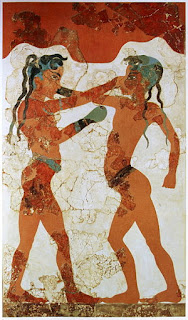 If you've been in the modern Pagan community for any long period of time, or even a student of ancient religious and societal history, you've probably heard the ancient Matriarchy theory; the proposal that there was once a Matriarchal civilization that only worshiped a Goddess, until they were uprooted by men. A common candidate for this theory is the ancient Minoans.

However, this theory is romance at best. There is no evidence whatsoever that such a society ever existed. The ancients worshiped many Gods, male a female. Greeks were even known to pair male and female Gods on equal standing at times, such as when the Homeric Hymns call Hera "no less than Zeus." Even if you want to use the women of Lesbos or the legend of the Amazons, Sappho also wrote prayers to male Gods, and we have no extensive record of the religion of the Amazons. Some think that the Amazon women were actually a sect of ancient Scythians, which means they were nomads. They had no settlements, which you would think would be necessary for a civilization. The religion of the Scythians included male and female Gods, at times shifting prominence with each other. But again, this is a theory. We don't actually know where the Amazons came from, but legend says they were daughters of Ares and Harmoina, which again points to a pairing of male and female. If someone can show evidence that the Amazons as a culture worshiped Harmonia above Ares, I'd be glad to hear it.

While there were certainly female rulers throughout time, that doesn't mean the society itself was a Matriarchy. Men still held most of the dominant roles. If Hillary Clinton had won the presidency in 2016 (which, let's be honest, she did), we would have had a female Head, but that wouldn't have made us a Matriarchy.

We know literally nothing about the Minoans. That's not even their actual name. It was given to them by the man who unearthed their civilization, Arthur Evans; naming them after the king known as Minos, which could have been not the name of one king, but that of a dynasty. So we don't even know if their nickname refers to a specific individual or not. We also know nothing about their leaders or their deities. The so called "Snake Goddess" could just as well be a priestess. We have no concrete certainty about it. If the statue is indeed a Goddess, it doesn't prove Matriarchy. It proves they worshiped female Gods. But the Minoan religion has not been studied by written information at all. It has been done solely by physical discoveries, many of which hold the possibility of pointing in different directions for origins and meanings. Those who make any modern attempt to construct Minoan religion into a practical system that can be followed based on ancient sources, are on a fool's errand. You'll likely find no real sources in their writings, because there are none. People can't make sources about information that doesn't exist. The records just aren't there. The Minoans were literally wiped off the face of the Earth by Thera's eruption, which completely destabilized the civilization and made it easier for them to be conquered and destroyed even more.

I don't necessarily have a problem with people who believe in the Matriarchy theory. I just have an issue when they try to present it as historical fact. It is anything but. I also don't have a problem if someone can actually prove the Matriarchy theory. My problem is historical honesty. I even once heard a Pagan speaker claim that the Pagans never had war, that war was a Christian invention. Again, dead wrong, to the point of absurdity. If you want to present your own theories or your own myths even, that's fine. But keep them under that label. Don't call them history.