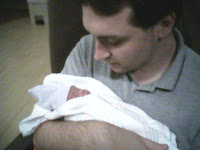 As a Hellenic Priest, it's not something I have done often, but with the growing number of parents in the Hellenic and Pagan communities, I think it's good to know how to do infant and child blessings. In ancient Greek culture, these kinds of acts would normally be marked by something called Rites of Passage, as the child came into the world and went through different stages of development. However, in our time, people make the request regularly for any given number of reasons. Normally the infant is blessed for a healthy and prosperous life ahead at birth or shortly after, and usually the priest or clergy isn't called again for that specific purpose. I myself have only done two in my life. One when I blessed my niece who was born in 2017, and I wasn't even asked. I did it because it was the only thing I could give her at the time. The other involved the countless prayers I did for my son when he was in the NICU.

As clergy, it's part of the service we provide to our community. I think that, if anyone needs protection, it's our children.

Blessing Instructions
1- Before interacting with a baby or child, make sure you are both up-to-date on your immunizations. You don't want to accidentally endanger their health or yours.

2- Before beginning any kind of ritual work, no matter how small, there is always of course the proper cleansing and purification that is to take place. With purified water, such as spring or filtered water mixed with some sea salt, wash your hands and gently dab a little on the infant or child. It's also a very good idea that, before the blessing rites even begin, that you both have taken baths and put on clean clothing all together.

3- Move next to invoke and appease the Household Gods and Spirit, specifically Hestia and the Agathos Daimon (Good Spirit). If the family has any good personal Ancestors or Heroes, include them too. Light a fresh cone of sweet frankincense upon the family's altar, their fireplace, or your own temporary altar you have erected for the ceremony. If incense is not available or preferred, use a libation of wine. Recite the following prayers,

Hestia, Goddess of the hearth,
the Good Spirit that dwells in all human homes and lives,
and the blessed Ancestor(s) and Heroe(s) of this family (insert name or names),
come from the holy realms to us now,
to aid this family and their new child as they begin a new life's journey.

4- Now is the time for the actual, ultimate blessing upon the child. The God you call upon will depend on the biological sex of the child, Apollon for boys and Artemis for girls. Of course, in the very rare instance that there are male and female twins, you would pray to both Gods, and it would be extremely fitting. Now is also time for the main sacrifice to either Apollon or Artemis, which obviously should be planned out with the parent or household beforehand. Take a single strand of the child's hair, or several if the parent and child consent, as an offering to Apollon or Artemis on the child's behalf. If hair is not available, give a sacrifice from the family that could be considered a modern substitute for a hecatomb portion. In other words, cattle meat like ground beef from the home's refrigerator. Anything you can add to the meat like honey, olive oil, or cakes, would make the sacrifice even better. With someone like Artemis specifically, try to get as close to game meat as you can.

5- For this example, we shall pretend the child is a girl and we are invoking Artemis. Present the sacrifice and the following prayer with the child present before the altar,

Artemis, daughter of Zeus,
Goddess who loves the young,
remember my voice, which has prayed so many times before,
and remember the many good sacrifices I have gifted to you,
and come to receive this one now as well,
leaving your blessings upon this family's female child.
In humble supplication do I pray, Bright Goddess,
for the life of (insert name) from this day forward.
O' Goddess of childbirth,
graciously did you bring this young girl into the world,
her life did you see sacred and worthy,
so may you never forget her,
but instead keep her life in your great favor each day,
and protected by your fierce bow which never misses.
From now until her last day,
and even into the afterlife,
for this blessing, I ask.

6- In ending the rite, extinguish the altar flame if there is one, and dispose of all offerings properly. If burning incense, wait until it has fully died out and properly dispose of the ashes. Incense ashes, libations and foods can be released outside in a respectful place for them to return to Nature. Release the ashes into the wind, pour the liquid onto the ground, and burn or bury the food. The food can also be left in a forest or some other natural area if you would rather reserve buried offerings for the Underworld Gods.

7- In finalizing the blessing, give the youth something sacred of Artemis or Apollon for them to keep, or to be kept for them, such as a small coin bearing Artemis' image, or bay leaves as they are Apollon's plant. The gift should be kept safe by the possessor(s) as something to always remind them and invoke the blessing of the God. Of course, in the case of an infant or child, you'd probably want to give the gift to the parents or guardian to keep safe, as young people have a bad habit of losing things.

In the Goodness of the Gods,
Chris Aldridge.
Posted by Chris at 11:32 PM