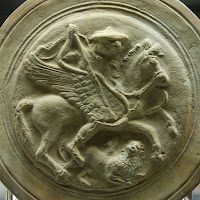 Often times, a bad temper is more trouble than it's worth. Many of us have anger issues, and some have a difficult time keeping it under control. I myself fall into this category without question, so I am certainly not giving a lecture here. In the past, my anger problems have damaged my relationships with others, and caused me to hold grudges and hate. I suppose it's a characteristic of a Scorpio, but that doesn't mean it has to rule me. It's ok to be angry, but it's not ok to let it spin out of control. Fortunately, our spiritual self can be stronger than our physical, and I have found a way in my Greek spirituality that helps me calm and center every single time I invoke it. That is, when I want to invoke it. There are times when I don't and probably should. It can also be used in general times of mental despair, when you're feeling depressed, scared or anxious as common examples.

The tactic first involves recognizing the existence and place of the Greek Heroes and being able to decipher their past feats and accomplishments into things relevant to our modern problems and challenges. In the case of severe anger, we can involve Bellerophon as I often do when faced with mental dilemma. He was the Hero who defeated the Chimera, so let's examine what the beast was and what it did. We all know the typical, physical description of the fire-breathing monster, composed of a lion, snake and goat; who went about terrorizing people and destroying the countryside where it dwelt. But in a broader sense, this being that Bellerophon quelled and killed caused internal havoc. It no doubt instilled anger, fear and anxiety in its victims, and therefore, Bellerophon also quelled and killed those emotions and mental hardships when He took the Chimera out.

It works best if done at the precise moment of anger, when the fury or despair is at its height. The problem is being able to push it aside just enough to do the invocation. The hardest part is summoning up that brief moment where you believe your anger isn't the most important or relevant thing. I bow my head and close my eyes first, so as to take my attention away from what's angering me. Then I repeatedly recite the following prayer in the greatest of sincerity and faith,

Noble Bellerophon,
please come and fight for me,
in this my most difficult time.

As you're repeating this simple request, feel the assurance that Bellerophon will conquer the monster inside yourself, and furthermore, see Him in your mind winning the battle. However you may want to see this monster manifested, you can do so, but know supremely that Bellerophon will kill it, because He will. I know that each time I do this, no matter how far gone I am in the situation, my temper subsides and I feel peace. Of course, Bellerophon isn't the only Hero who can be called upon for our personal struggles. All you have to do is think about the feats and accomplishments of whichever Hero you are considering, and determine how those things can be expanded to cover your own personal perils.