How Can We Obtain and House Heroic Relics Today? 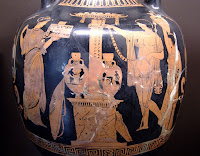 Relics have permeated religions around the world, and ancient Greek is no different. Although in the latter case, and for this post, relic probably isn't the right word. While you might could argue the name philosophically, relics have more to do with the remains of something from the past. The endeavor we are talking about here would be more like a Cult Object. Sometimes, the ancients claimed to have relics from Gods, like the Athenian wood piece that once stood on the Acropolis as a symbol of Athena after it allegedly fell from the sky, but in a larger sense, our relics come from the Heroic Class, and were probably much easier to obtain and maintain because they were of earthly, human origin. The bones of Theseus Himself were once thought to have been returned to Athens and interred below a sanctuary built to Him. Both sites are now lost. There's no sign of either the sanctuary or the burial. Relics can be used to represent a Hero, especially in their shrine or altar area. They can also be used to connect with the Hero or bring about some sort of power that is attributed to them. For example, if someone could get the sword of Theseus, or the lion's skin of Herakles, they would have an energetic vibe that would be of the most unique kind.

However, the sad reality for us today is that much of our ancient religious history has been lost or destroyed. Obviously, if you're talking about a modern Hero like someone in your immediate family or community, then something of their own would naturally be easier to obtain. And by the way, that's one of the great things about Hellenic religion, it can be so broad, yet also so extremely personal to you. But when we're talking about ancient Greek Heroes, their relics today are mostly found in the dusts of the wind, if that. There's no doubt in my mind that, had ancient Greek religion been allowed to freely continue without being hindered or persecuted, we would today have a treasure trove of relics. But the unfortunate circumstance is that we don't have really anything directly linking us to ancient Heroes. So what can you do?

Well if we don't have relics, and we want them, we have to find something which is the next best thing. More along the lines of creating a Cult Object. The first way would be in the recreation, or in other words, the reproduction of an original object, accompanied by a request for the Hero's blessing upon the object. For example, you might find a remake of the shield of Achilles, the spear or lance of Bellerophon, a bow of Atalanta, or even as liberally as coinage, shoes, or clothes that they may have carried or worn during their time period, and request that the Hero bestow their power upon it. Naturally, some of these objects would be harder to depict than others due to available information, but in the event that you feel satisfied with said object, you might recite a prayer like this:

Noble Hero/Heroine (insert name),
upon this, a reflection of your holy (insert name of object),
may you ordain it as your object from this day forward,
to carry with it always your presence, power and memorial.

The last step in making the Cult Object is to treat it like one, as precious as humanly possible. House it in a closed and protected area, like a stylish box of some sort, set up to act as a shrine or a house of the existing shrine for Objects of the Hero. So if you have a shrine to Theseus, you can add the box with His Object to it in some fashion by connecting the box to it, or placing it below or around it, so long as it's in a safe area. You might even consider a box or storage container with a lock and key.

In the Goodness of the Gods,
Chris Aldridge.
Posted by Chris at 5:16 PM