To Be a Priest of The Gods 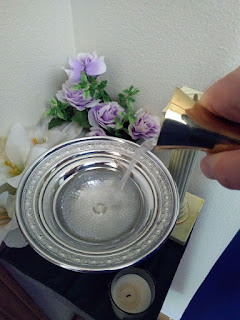 Ever wonder what a day in the life of a priest of the old Gods is like? Well, if you don't, here's your opportunity to see, at least from my point of view. I've served the Gods as a priest for nearly 10 years. I have found that, as a priest, most of my service to the Gods does not consist of leading public rites or counseling adherents to the religion. Instead, much of it entails daily duties that are mostly preformed at the shrines of my own home, as being a priest also means ongoing service to the Gods themselves. My philosophy is that a priest or priestesses' home is their temple, and within that temple, are the shrines and altars they build to their Gods. And by serving the Gods each day, you cultivate your relations with them. As their clergy, it's important to do this as often as possible until you develop a routine that is as common as your regular activities throughout the day. While it may sound tiresome, I've actually found that the most basic of devotions are enough, and only take a short amount of time.

For starters, it's a good idea to get out of bed at a reasonable hour. It doesn't have to be before sunrise, but it shouldn't be after lunch either. Although, time is really something for us to go by. To the Gods, it has no meaning. They can move through it as they choose, they are not restrained or dictated by it. But still, you should start your daily rites with enough time to do your other daily activities.

After I clean my house, eat breakfast, and take a shower, I prepare the altar with incense and a libation. Finally, I put on my priestly robes for the rite. The first duty is properly disposing of the offerings from the previous day, if any still remain, and making sure the temple or worship area has remained clean. Remember, as clergy, you are an ordained caretaker of these places and the things involved with them. It is your responsibility to see to their care and continuance. You're a keeper of knowledge, and a securer of the sacred.

As I light the candle to represent the flame of the altar and hearth, I first invoke Hestia of course, pouring a small portion of libation to Her. Your daily libations can be as simple as cool, clear water. I believe the Orphic Golden Tablets speak of it. As you might know, the ancient Egyptians were also known for pouring waters to their Gods. It's not uncommon among the world's big Polytheistic religions. The great thing about refreshing water as a libation is that it's a good thing to drink in the mornings, and it's readily available. You just have to turn on your faucet, no special trips to the store or additional spending needed. Once done, I do a grand invocation to all the Gods via the Orphic Mousaios, followed by the burning of an incense cone to them all. The incense produces abundance that is surely enough to be portioned to all the Gods invoked. This is important.

Now comes my favorite part, an individual address and libation pouring to each member of The Dodekatheon (the 12 Gods). As I recite each short prayer, I pour a small portion of the water into the offering bowl.

The closing prayer, and the last portion of the libation, once again goes to Hestia as the rite is brought to an official close. And that's it. I've done a basic devotion to the Gods today, and I can start my day in their light and guidance. If you like and have time, you can also end by doing divination before the final prayer and offering, to get a direct message from the Gods for your day.

In the Goodness of the Gods,
Chris Aldridge.
Posted by Chris at 12:00 AM