Shrines for Wells and Water Blessings 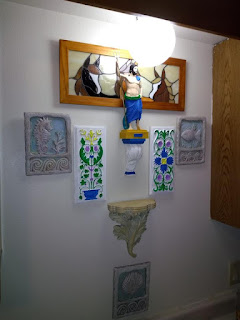 In ancient Greece, even major Gods at times took on a very local and personal role in the lives of worshipers. Poseidon, for example, is God of the sea, but being also the God of rivers, He is worshiped as a God of fresh as well as salt water, and can be credited for the creation of even the smallest portion of water such as those found in wells and springs with the mere strike of His mighty trident.

Keeping in mind the fact that there was no separation of religion and personal life for the ancient Greeks, I decided to make my new home as religious as possible. When I moved, I realized I had a whole bunch of statues that I had to make places for, lest many of them end up in the storage basement. Therefore, one thing I did was to create a Poseidon shrine above the main water source of my home (the kitchen sink), with the hope that Poseidon will always bless not only our own water, but the very source from which the city itself gets its water.

The shrine is not large or expensive to build at all. The small, colorful statue of Poseidon was purchased from Greece, but of course, it's not the only place you can obtain said pieces. Either way, the actual cost of the statue is very low given its size. Then it simply stands on a platform above the water source in the home. If you choose to create one, that's all you need. You don't have to be as colorful and fancy as the one I have built in my own home, and at this shrine you can not only invoke Poseidon for water blessings, but also pray and offer to Him in general. After all, it is a place of naturally flowing water. When you build it, do so with the these intentions. If you don't have a statue, you can use something which symbolizes Him, like a trident, sea shell or seahorse for examples.

The following is a prayer one can use to officially open said shrine and bring in Poseidon's presence:

O' Lord Poseidon,
great God of Helicon,
from the heights of Olympos,
and the cool depths of the Earth's rivers, wells and springs,
hear my humble supplication,
and let your beautiful presence dwell here,
at this shrine built to your Honor.
Strike here, your trident,
that pure and refreshing waters always come forth,
for all who dwell within this household.
Let it be done.

In the Goodness of the Gods,
Chris Aldridge.
Posted by Chris at 10:47 PM

Email ThisBlogThis!Share to TwitterShare to FacebookShare to Pinterest
Labels: Poseidon