An 18 Year Old Story of Nike 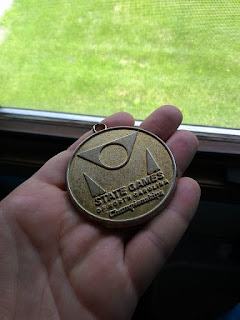 Nike is Greek for victory, and sometimes in life, She has blessed me. One of my first passions in life was Martial Arts, and I was really good at it. I enrolled in Tae Kwon Do in 1999 and quickly moved up in the ranks. By June 24th, 2000, I was a blue belt, and that's when I attended my first state tournament in Raleigh, North Carolina, aka the State Games Karate Open. I competed in both events, those being forms and sparring, and I won the gold both times, thus making me a state champion. Granted, it was a humble achievement, as I didn't have a lot of competition, but I still defeated all those who stood before me. Standing on that first place column at the award ceremony was the happiest day of my life at that point. I was only about three feet off the ground, but I felt like I was on top of the world. Afterwards, my step-grandfather Jimmy, who has always been like a real father to me, took me to my favorite restaurant at the time in Thomasville, Burger King, for my victory feast. I ate, to my memory, two triple cheeseburgers, fries, and ice cream. Of course, in those days, I was a teenager in Karate with astronomical metabolism, so I could eat like that. Needless to say, things have changed a bit since then. I really owe a lot to Jimmy. If it wasn't for his support, I wouldn't have stayed in Martial Arts anywhere near as long as I did.

Around about 2004, however, my participation in Martial Arts dwindled, and I have only recently this year decided to pick it back up permanently. The story behind that is a little interesting. I began watching the new Cobra Kai series on Youtube Red, because I'm a fan of the old Karate Kid movie, the original anyway. After watching the first season, I saw a lot of Johnny in myself these days. The show opens up 30 years after Johnny's heyday, and he's now just drifting through life, brooding on the past, not really doing anything, and not wanting to meet the world anymore. However, he soon finds a revival of his Karate talents and builds himself back up. I realized that was a lot like me, and that I needed something to boost my confidence and self-worth again. I've even decided to compete in the Illinois Nationals next year in all three events, those being forms, sparring and weapons.

As you can see in the above picture from today, I am holding the dust of my old championship, the only remaining gold medal I won 18 years ago, very faded. It doesn't even have it's necklace around it anymore. Maybe it's time to win some more.