Reaching High: Why Is It Sometimes Hard To Connect With Gods? 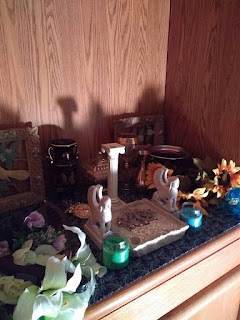 A friend of mine recently asked me a question to discuss on my blog, which to my interpretation, asked why we as humans, even though we're spiritual, sometimes have a hard time connecting with the Gods?

Generally speaking, I don't think it's "hard" to connect with the Gods. I just think we need to learn how to look and listen. Nevertheless, a certain individual may indeed feel as if there is some sort of block or distance between them and the Higher Powers.

1. Miasma. It's the Greek word for pollution, and it refers to impurities on, or emitted from, the body. Being clean of physical uncleanliness, as well as negative energy and negative presence was, and still is, a crucial part of the ancient Greek religion. Greek temples would often have purified water outside of temples, or water used for purification purposes, before people entered the sacred area of the God. The Christians later adopted the custom with their water fonts. Negativity in general can also be considered an impurity today. Some Hellenists, though, may think of ritual cleansing to hold more of a purpose of respect before the Gods, and not necessarily that a lack thereof would hinder connection. However, in ancient belief, they certainly believed that being impure or polluted would cut one off from the Gods. So perhaps one reason a person feels a disconnect is because they are not pure before the Gods.

2. Disconnection with nature. Keep in mind, humans have spent the last 2,000 some years trying to separate themselves from the things that the Gods gave us to connect to them with; nature. How can we expect to connect with, or even realize the Gods are there, when we think of ourselves as separate from the natural order or the universe itself? Billions of humans have lost sight of the fact that nature is a manifestation of Divinity, a doorway through which we can walk. More so, billions of us also naively think of ourselves as being separate from nature all together. When we think we don't need it, we don't revere it, and when we don't revere it, we don't acknowledge the Divinity around us.

3. Some of us simply don't spend enough time trying to connect. I've even heard some Pagans say that they don't do rituals for one reason or another, or that they don't even worship the Gods. This no doubt explains some of the disconnect people may feel.

However, there are many things we can do to better our connection with the Gods. One, even though it can be sometimes hard, we can live a positive life instead of a negative one, freeing ourselves of anything that may physically or spiritually pollute, and keep doing so as much as possible. Two, realize not only our connection to nature, but the reason for its existence, which I explained above. Take more time to be in it. Even if the best you can do is to put plants in or around your home and become a small time gardener, do it. Lastly, practice something religious or spiritual every day, or as often as you can. Even if it's just a morning prayer along with an offering of incense. Some days you may be able to do more ritual practice than others, but the more bricks you lay, the more it will increase your spirituality and spiritual awareness.