The Intercession of Hypatia of Alexandria 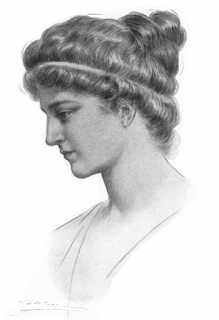 Many of us, Pagan or not, know the epic and also tragic story of Hypatia of Alexandria. She was a Hellenist and one of the most profound ancient female teachers and philosophers who lived in Alexandria, Egypt at the time of the emergence of the new religion: Christianity. As the new religion took control, sometimes by force and murder, Hypatia became a threat to the ambitions of the Christian authority. In 415 CE, She was attacked by a mob and brutally killed, her remains being set ablaze. She is now considered by some Hellenists to be a martyr and a Heroine.

I myself had never thought about praying to Her until the other night when I was desperate to change jobs. As I told many of you in one of my recent blog posts, I was working a part time retail position to help pay some of my debts. Retail, as many also know, is the most overworked and underpaid job one can attain. Needless to say, I did not like the position at all. Even if I could have elevated myself to management, I still would have resented the long hours I saw them work. It just wasn't something for me. Besides, I felt I could do better than retail anyway.

While in the shower, I contemplated on who I could pray to (besides obvious Gods) that might give me good intercession on the matter. I first considered the job I actually wanted and thought I could do well in, and one such that was immediately available was Paraeducation at a local school district. It wasn't as hard and paid fairly well. As I thought, I realized that any Heroine I prayed to would have to be one closely associated with teaching, wisdom and knowledge, and Hypatia came to mind. So, in prayer that night, I asked Her to speak to Hephaistos and Athene for me, those being the Gods of labor and wisdom themselves, that I might be able to secure the job I want in that field.

The next morning, I received a call from the school district office offering me a job as a Paraeducator. My prayer had been answered. I wouldn't have to work a job I hated anymore, and I could focus my strengths on something in society that I can do well and enjoy. Hypatia of Alexandria seems to be a strong Heroine to invoke for matters of interceding to the Gods on one's behalf, namely concerning things that She is focused on. The idea behind this form of prayer is that the Heroes and Heroines exist closer to the Gods than we presently do, and therefore can contact them more easily.

In the Goodness of the Gods,
Chris.
Posted by Chris Aldridge at 2:19 PM

Email ThisBlogThis!Share to TwitterShare to FacebookShare to Pinterest
Labels: Hypatia of Alexandria