Wife and Sister of Zeus ~ What Does That Mean? 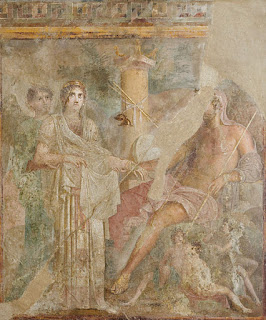 As we have commonly heard and come to believe in Greek religion, Hera is the wife of Zeus and also said to be His sister. For us, the thought of marrying our brother or sister would be repulsive at best, it's something that we would never do, at least most of us. But does the marriage of the King and Queen of Heaven mean the same thing? Is it the same as it would be for a human? The answer is a resounding no. The Gods are not humans and do not exist as humans would. Zeus and Hera's marriage is not how we would perceive such a union between mortals in the flesh. And in this post, I would like to explain why, using my own beliefs and understanding insofar as a mortal can understand it, or at least attempt to do so.

Zeus and Hera are brother and sister in the sense that they are the unity and opposites of the highest divinity. Zeus is the King of the Gods, Hera the Queen, and that two sided divinity holds together in relation to one another. Secondly, the marriage of Zeus and Hera is not one of flesh, it is the marriage of their divinity in the same regards as described above. The Gods can have sex, but they do not need it to create. The Gods carry the creative powers of all existence, and therefore Zeus and Hera use their powers of creation together in their union and marriage of the highest divinity. In short, one could say that Zeus and Hera's divinity is what is married. They came together with their tremendous powers, creating that unbreakable and ultimate divinity in the universe. Their brother and sister relations could also be described in the sense of a common identity between Gods. As an example, a human might call a fellow member of their religion, or even their good friend, their "brother or sister." Some of my fellow Hellenists have called me "brother," but not in the literal sense. We are united by our love and loyalty to the Dodekatheon and the principles of Hellas, and in that we are family.

In conclusion, Zeus and Hera are not brother and sister as we would perceive it among mortals. They are not flesh and they are not humans. They are divinity.

In the Goodness of the Dodekatheon,
Chris.
Posted by Chris Aldridge at 2:34 PM