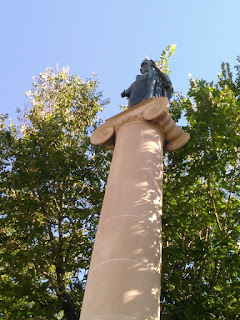 As many of us know the story, the Titan Goddess of Wisdom, Metis, was "devoured" by Zeus upon learning that She was pregnant by Him, as He feared He might be overthrown just as He overthrew Kronos. That's what we are told in myth, but I would like to express my belief as to what the story is telling us and how it led to the birth of the famous Athene from His mind (or head). Before I explain my belief and interpretation of this story, I want to say that I do not believe Zeus would devour anyone. Knowing what it meant to escape such a fate and rescue His family from it, to whom it had already happened, I do not believe Zeus would find it a just or honorable thing to do. Perhaps we could say that fear is a great motivator, but to suggest that Zeus acted compulsively out of fear, would be to say that He's human, which He is not. The Gods are not subject to human error. Besides, it was quite clear that no one could defeat Zeus. He knew He was ruler and that no other Gods were above Him. To Zeus there is no equal, and He would have known that He had no reason to fear anyone overthrowing Him.

So, what shall my mind make of the story, since this is the most popular version of Athene's birth? In some respects, some people may believe the Titans to be natural forces of nature. In this case, this is what I believe in regards to Metis. When the Olympians came to power, we see that Zeus gained epithets identified with order. Therefore, Olympos basically brought order to everything in existence, as the Gods thereon ruled over existence with the minds and abilities to direct it. When Zeus "devoured" Metis, what He actually did was to take in the existence of wisdom itself, in all its forms. Into Him went the supreme wisdom of the universe, as one would expect the Father of All to have and gain, and from that, He created from His mind Athene. From the mind of the highest divine was created the Goddess of Wisdom who would rule over wisdom in all power and consciousness. Olympos had once again gained order and authority.

It is not to say that the Titans themselves were chaotic, for we still worship some of them, but Olympos certainly brought a new rule of order. If you're a Hellene or someone who has ancient Greek influences in your religion, I hope I have provoked thought and philosophy.

In the Goodness of the Dodekatheon,
Chris.
Posted by Chris at 4:39 PM