The Underworld and Elysium: Where Are They Really? 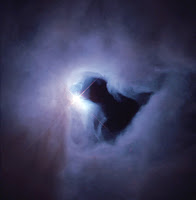 Greek mythology and religion is ripe with details of the realms of the dead and afterlife. Last night, I was thinking on the question of where these places are located, particularly the Isles of the Blessed (Elysium) but also the Underworld itself. I realized that these places could not exist on Earth because they are eternal, while the Earth is not. One day, it will die, unfortunately. The good thing is that none of us today will be around to experience that, and neither will our distant descendants, but it will eventually happen. This is one of the reasons why I don't believe the Gods are merely nature, because the Gods are eternal and nature is not. But that's neither here nor there in this post. The realms of the afterlife have no ending and no destruction, therefore they cannot be part of anything that can have an ending or be destroyed. I suppose one could argue that the realms could separate themselves from the Earth, but it seems to me that it would be less complicated to just not be connected to it. This is much like the people who make the mistake of thinking that the Mount Olympos of the Gods is on Earth (in Northern Greece). But Homer tells us that it is, in fact, not.

In Book VI of The Odyssey, Homer writes that Olympos has no wind, clouds or precipitation, but that it stands peaceful in eternal light. This excludes every mountain on the face of the planet. Plus, humans have climbed the Mount Olympos on Earth and reached its top, and it's probably a safe bet that the Gods would not allow mortals to just invade Olympos at their own will. Therefore, Mount Olympos is not a place on Earth. The only place where there is no wind or precipitation or clouds, but that still retains light, is the heavens. And is the real Olympos even actually a mountain, or is that a metaphor for its height above humanity?

So the question remains, where are the realms of the afterlife? In my belief, they are not part of this Earth, but exist in their own worlds completely, and they are not accessible by us in this form in that we cannot yet enter them obviously. We know of Heroes who were said to have passed into the realm of the dead and returned, but these were exceptional people who were allowed to enter for one reason or another, and eventually, they returned, and the Underworld is well-guarded against intrusion at that. Cerberus is one of the guards who stops the living from getting inside. Nevertheless, these worlds obviously remain in contact with ours, which means they do have an opening between them, through which the dead pass, and even allows us to communicate with people there such as our ancestors. But where are these worlds? Do they even exist within our own region of the universe? There's no sufficient answer to that in my mind. But let us philosophize as much as possible.