Greek Religion and Greek Mythology ~ The Separation and Unity 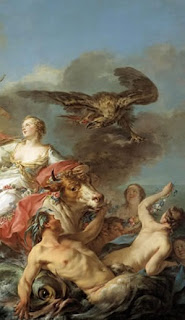 Many people in our modern time look at Greek religion and Greek mythology and assume that they are one in the same. Evidence of this fallacy is found in the fact that they commonly describe the Greek Gods entirely by their mythologies, and it goes to show, unbeknownst to the modern individual, that they don't know anything about what they are speaking. However, that is not to say that mythology should always be completely ignored or discounted, and some of the myths are ones that you study throughout your life, not something that you read once and never touch again. I've been Hellenic for the better part of 6 years, and I am still studying mythology. In fact, as I write this, I am about to do more readings into The Iliad. So some of the myths are life long studies, as they can take that long to fully grasp, and one may not even have completely mastered it by the time they draw their last breath. Greek myth is anything but simplistic, contrary to modern assumptions.

There is the coexistence of a separation and unity when it comes to myth and religion that should be recognized. First, we must discuss the separation. In our time especially among Hellenists, the myths are not literal. Most myths are allegorical, metaphorical and symbolic, should a Hellenist choose to accept any of them at all. One reason they are not often taken as factual events, is because different versions sometimes contradict, meaning they have a cultural, relative basis. Each city state in Greece had its own mythology. A myth can also be written by anyone, at anytime, for any reason. What's important to understand about myth is that it is a way for someone to understand something in the best way they can at the given time, which may or may not be the actual truth of the matter, but it is nevertheless how they understand it. For example, if you and I lived in ancient Greece as servants of Apollon and I forgot to give Him His daily offerings and I suddenly died that day mysteriously. You might conclude that Apollon shot me down for not honoring Him as I should have, because that's the only explanation you can imagine at the time. You have no way of knowing that my unhealthy eating habits and lack of exercise for the last ten years caused me to have a heart attack, which is the actual reality of the matter. It's not that you lied, it's just that you explained it the best you could.

On the other hand, myths, in my opinion, are an excellent source for learning the attributes and capabilities of the Gods and Heroes, because even if the tales themselves are not literal, they are describing literal beings. For example, if someone writes a story about John Smith who lives at 1234 South Ave and does archery, the story they tell may be their own version of an event, it might even be a shabby recollection, but it is still talking about the John Smith of 1234 South Ave who does archery. Sometimes, when I am writing my own prayers to Gods and Heroes, I will look through myths to find relevant connections I can use to construct such poetic art.

So within Hellenic religion, there is a separation but also a unity to be respected and learned from in mythology.

In the Goodness of the Dodekatheon,
Chris.
Posted by Chris Aldridge at 2:58 PM