Bellerophon - His Reign and Resting Place 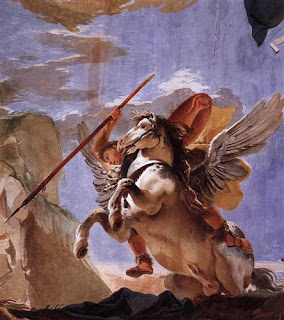 Bellerophon, transliterated as Bellerophontes, is my favorite Hero next to Theseus. Like Theseus, some say He was born of Poseidon and a mortal woman, while others say He was born mortal all together. Upon mighty Pegasus, Bellerophon flew over the hideous fire-breathing monster known as the Chimera, which possessed the parts of a lion, goat and snake. Bellerophon knew He could not get close enough to the beast to kill it without achieving flight, and for that He chose Pegasus to aid Him, given to Him by Poseidon, and aided in taming by Athene. The Gods very much loved Bellerophon as He went out on His mission to free the land of its tyrannies, His greatest and most well-known achievement being the defeat of the Chimera. He even went on to defeat the famed Amazons who were carrying out invasions in the land.

However, unbeknownst to Bellerophon, the king who had sent Him on these missions had done so with the hope that He would be killed trying, and so when Bellerophon returned in victory, the king tried to send an assembly of men to kill Him; all paid with their lives. Bellerophon was a force to be feared by those of ill intentions and terror. The end of His life, however, was marked with tragedy, unfortunately. He decided one day that He would fly up to Mount Olympos to be in the presence of the Gods to give a list of His grievances with the Gods, but Pegasus wanted no part of the complaint mission, and the horse threw Bellerophon off its back and He fell to the ground quite injured, and carried on the rest of His life in the handicap.

Bellerophon may have failed to ascend to the abode of the highest Gods when He lived among mortals, but He would certainly ascend to Greek Hero status as one of the most famous of all time, which also earned Him worship by Greeks, and He is specifically known as a Corinthian Hero. Corinth rests around the middle between Sparta and Athens.

Today in modern Turkey, there stands an ancient tomb bearing the image of Bellerophon on Pegasus. The tomb has been dubbed the "Tomb of Bellerophon."

As far as I can tell, entrance into the tomb did not reveal His corpse. His physical body may be lost to history, but certainly not His eternal being nor His memory. The image of Him flying high on the winged horse and striking down the Chimera, is one that has lived, and will likely continue to live, in the minds, mythologies and cultures of humanity until the day the world comes to an end.

The Hero Bellerophon can be invoked against tyranny, oppression, fear, negativity, hostility, aggression, malevolence, and can be invoked for bravery, courage, resourcefulness, strength, fortitude, perseverance, and ingenuity,

Prayer to Bellerophon (1):
Bellerophontes,
on winged Pegasos,
fly from the skies,
bearing your spear of victory,
and triumph over all that hinders goodness.
Upon the horse of heaven,
advance the light of humanity,
against enemies and enmity,
and thrust down your might,
bringing peace and freedom once more.