Hephaistos Will Make A Sculptor Out Of Me Yet....Maybe!

I was recently saddened to learn that one of my good Pagan friends, Amanda Mandalke from Freeport, Illinois, which is where I used to live, is moving a long way across country to California. She used to run the Freeport Mystic Hollow Shoppe, which was a great local place to buy religious materials for polytheistic and Pagan practices. Unfortunately, the store closed soon after opening and many people who had helped operate it moved away, except for my friend and her family. There was some hope that the shoppe could reopen, but now, there is no chance, not in this area anyway, because once my friend is gone, all of the shoppe's former owners will have left. However, she did leave me with a special gift, a small statue of Artemis. I had seen this piece before online, coming from a dealer in Greece, but I am not sure where this one originated specifically. My friend wanted to give it to me because it was damaged, and from seeing my works on Hellenic statuary in the past, she hoped I could restore it. I was more than happy to take it. I have probably saved some Greek statues from the dump in the past, and I would not, for all the money in America, see any representations of old Greece go into the trash. So I accepted the gift in honor of my friend and went right to work restoring it. I was very excited to get started on this project, and I took this statue and made it all my own. With that being said, I don't think it was my best work, but I will nevertheless keep and cherish it all my life, as I do all of my religious items. 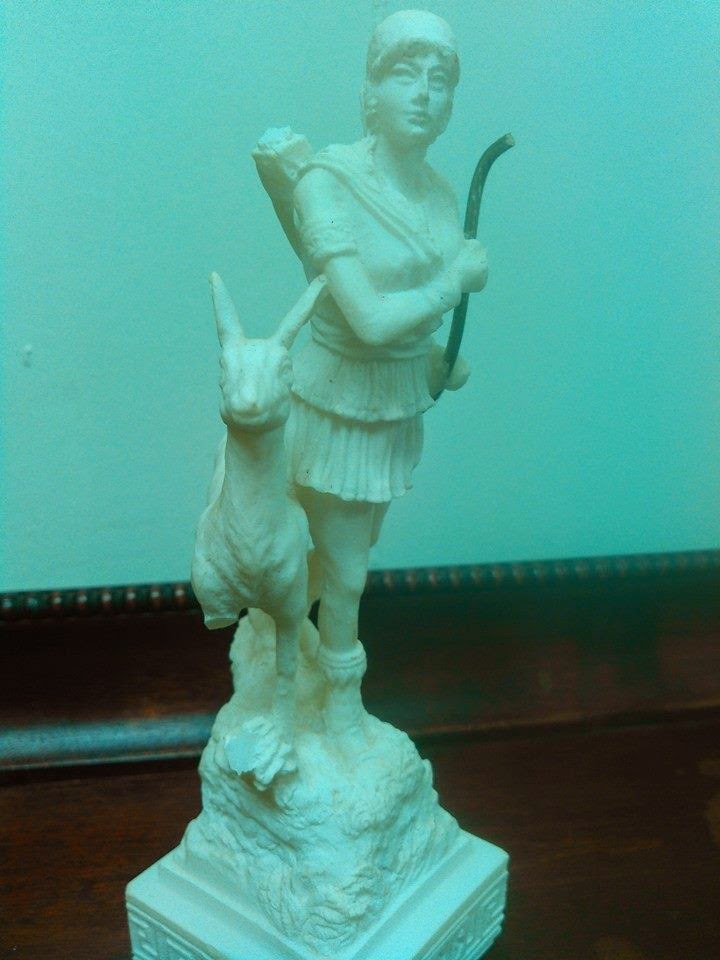 As you can see from this picture, the main area of damage was to the right leg of the deer. It was missing. But there was also minor damage to the bow and to the arrow tops. Fortunately, because the statue was not extremely detailed, the repairs were not difficult. The mold that I used required only basic shaping techniques. Before starting, the statue received a rinse to get off dirt and dust. The first thing I went to work on was the bow, which appeared gold, and was faded. So, I repainted the bow gold. Unfortunately, I ruled the chipped part beyond repair, so I replaced it in the hands of the statue to where both side would have equal length, so it would not appear as if a part was missing from one.

The second step was completely replacing the missing leg from the deer. I used very basic oven clay for this, shaping it into a leg and attaching it to the deer with glue. Then, I painted the entire deer so all parts would blend in as much as possible. The robes of the statue I painted purple. I tried to stick to reasonable colors as much as possible, nothing too exotic or "un-Greek." The robes were, by far, the hardest thing to paint. While there's little detail to the statue, it's also quite small, and therefore hard to navigate with a paint brush. 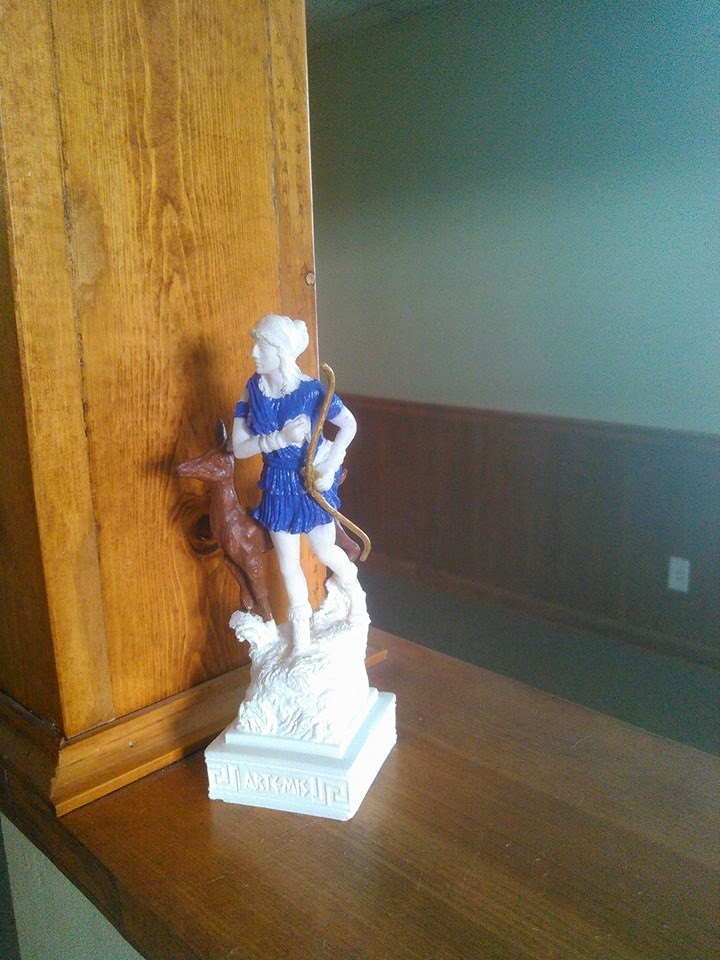 Over all, I am satisfied with the end result. Of course, now, the first order of business is to dedicate it to Artemis on my altar and give Her a good offering. On the bottom of the piece, I wrote, "Chris dedicates this statue to our Lovely Goddess of the Hunt. 2015." I will still be adding touch ups in the next few days, but over all, the statue is complete to the best of my ability. (Click on the pictures to enlarge),